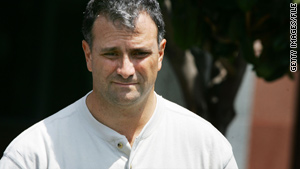 (CNN) -- Disgraced former lobbyist Jack Abramoff was transferred Tuesday from prison to a Maryland halfway house to serve out the remainder of his sentence, a spokeswoman for the Bureau of Prisons told CNN.

Abramoff, who has been in prison in Cumberland, Maryland, has a scheduled release date of December 4, according to the agency Web site.

Abramoff, once a high-rolling Republican lobbyist, pleaded guilty to a raft of federal corruption charges in 2006. He admitted illegally showering gifts on officials who provided favors for his clients and agreed to cooperate with prosecutors. Among other things, the inquiry led to prison time for a former congressman, Ohio Republican Bob Ney; for Stephen Griles, once the Bush administration's deputy interior secretary; and for several former congressional staffers.

Abramoff said at a 2008 sentencing hearing that he was "a broken man."

"I've fallen into an abyss," he said. "My name is the butt of a joke, the source of a laugh and the title of a scandal. ... I hope this horrible nightmare ends at some point."