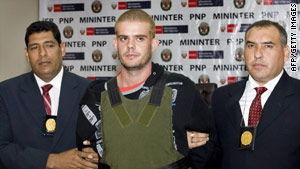 (CNN) -- A Peruvian police report leaked Monday says the alleged victim of Joran van der Sloot was found in his hotel room on the floor, half-dressed. The report provides new details about the hours before Stephany Flores' body was found.

Van der Sloot, who was twice arrested in connection with the disappearance of Alabama teen Natalee Holloway in Aruba in 2005, is in Peruvian custody as a suspect in the killing of Flores, 21.

According to the document, the Hotel Tac, where van der Sloot was staying, received a call from someone looking for him about 11 p.m. June 1. The receptionist forwarded the call, but no one answered. The hotel worker assumed that van der Sloot was asleep because the room key was with him and not the front desk.

Flores was bleeding from her nose, the report said.

The hotel employee became frightened at the sight and went to alert her supervisor and the police, turning off the television and lights on her way out of the room, the report said.

In Session's Jean Casarez and CNN's Mayra Cuevas contributed to this report.