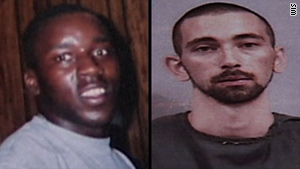 (CNN) -- This week's shooting death and subsequent dragging of a black man in South Carolina are being investigated as a possible hate crime, the Newberry County Sheriff's Office said Friday.

Sheriff Lee Foster said the body of 30-year-old Anthony Hill was found early Wednesday on a road near an elementary school in the town of Pomaria, 35 miles west-northwest of Columbia.

Hill had a single gun shot wound to the head, his body was nearly nude and a rope was around his neck and upper torso, Foster said.

Foster said Hill's body -- which carried no identification -- was found around 4:30 a.m. Wednesday by a motorist, who called 911. Officers followed a trail of blood and human tissue nine miles to the trailer park where Hill's co-worker Gregory Collins lives, surrounded his trailer for nearly four hours and finally resorted to tear gas, Foster said. "He came outside and gave himself up," Foster added.

Collins, 19, who is white, is charged with murder. Both men worked in Newberry at the Louis Rich turkey processing plant, said Foster.

"They did know each other; they worked in the same industry, on the same shift but different divisions," said Foster. "Neighbors told us the two spent most of the day together Tuesday. They were seen on a porch drinking together."

Hill, an Army veteran who lived in the neighboring county of Fairfield, was estranged from his wife and had two children, Foster said.

Investigators have not concluded that the killing is a hate crime, but are looking at it as one, according to Foster. "We called the FBI out of an abundance of caution," he said. "We have no motive whatsoever as to why these two gentlemen would have been together, then one shoots the other in the head and drags him down the road. It's a horrific act of violence."

Collins, who is being held in the Newberry County Detention Center, has been assigned a public defender.