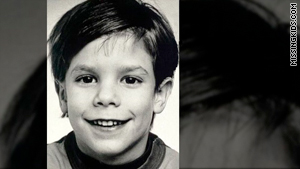 Six-year-old Etan Patz disappeared while walking to his school bus on May 25, 1979.
STORY HIGHLIGHTS
RELATED TOPICS

New York (CNN) -- His was the first face of a missing child to appear on the back of a milk carton. Now, nearly 31 years to the day since Etan Patz vanished from a New York street, authorities are reopening his case.

The communications director for Manhattan District Attorney Cyrus Vance Jr. confirmed that the office is taking another look at the decades-old mystery.

Duggan added, "This was the disappearance of a child that gripped the residents of Manhattan and continues to leave many questions unanswered."

Etan was 6 when he disappeared on the morning of May 25, 1979. "It was the first day that he was to walk two blocks from his apartment to the school bus stop," said Lisa R. Cohen, author of "After Etan: The Missing Child Case That Held America Captive."

"He had been wanting to do it by himself, and they gave him permission, literally two short blocks," Cohen said. "And his mother could see the bus stop at the end of the street and she saw parents there, waiting with kids for the bus, and so she let him go."

Jose Antonio Ramos, a convicted child molester, has been identified as a suspect in the disappearance, but has never been charged in connection with the case.

According to Cohen, Ramos initially told investigators that he was "90 percent sure" that a boy he had taken home on that day in 1979 was Etan.

Ramos has since denied making that statement, she said.

Cohen said Etan's father, Stan Patz, contacted her after the news was announced that the prosecutor was reopening the case. "He said, 'Maybe we'll finally get our day court,'" she said.

From families and detectives to people in the missing children movement, this case changed everything, Cohen said.

"Before Etan, parents did not have an image in their mind that something could happen to their children," she said. "And after Etan, they did."