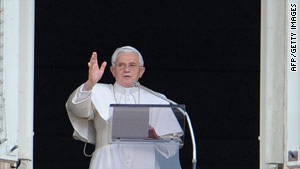 (CNN) -- The Vatican will embark on a sweeping new legal strategy Monday in responding to allegations of sex abuse in the United States, CNN has learned.

Responding to a Louisville, Kentucky, lawsuit that seeks to depose top Vatican officials -- including Pope Benedict XVI -- the Holy See plans to file a motion Monday denying that the church issued a document mandating secrecy in the face of abuse allegations, as many victims allege, according to a Vatican attorney.

The Vatican's motion also will argue that bishops are not employees of the Holy See, exempting the Vatican from legal culpability in cases of alleged abuse in the U.S., said Jeffrey Lena, the Vatican's U.S.-based attorney.

Much of the litigation against the church has argued that a 1962 document -- called crimen sollicitationis in Latin, which means "crimes of solicitation" -- barred church officials from contacting civil authorities with allegations of sex abuse against the church.

Abuse victims and their attorneys have said the document is evidence of a broader church culture of secrecy and cover-up in responding to abuse allegations.

For the first time, the Vatican on Monday will challenge those charges.

"Contrary to what some plaintiffs' attorneys have contended, crimen did not mandate bishops to keep silent about sexual abuse in their dioceses," Lena said. "That is important, because many Catholics, in particular, have been saddened by the idea that the laws of their church would prevent compliance with the law, and it simply is not true."

The 1962 document primarily refers to cases involving confession. If a priest tries to solicit sex from someone who is trying to give their confession, it says, the allegation against the priest should be "pursued in a most secretive way ... under penalty of excommunication."

Church leaders argue the document had no bearing on civil or criminal law and was superseded by the 1983 Code of Canon Law, which "treats the sexual abuse of a minor (and solicitation of a penitent by confessor) as criminal behavior, which may be punished by dismissal from the clerical state."

The Vatican also plans to argue Monday for the first time that bishops are not employees of the Vatican, as a handful of U.S. lawsuits against the Holy See allege.

"We will respectfully submit that this is a fallacious theory," Lena said. "The Holy See, or the Pope, does not 'employ' bishops in the United States."

The church argues that bishops act with local autonomy in their respective dioceses.

The Louisville case was filed in 2004 by three men who allege that they were victims of priest abuse as children and who are seeking damages from the Vatican.

The men's attorney, William McMurry, did not return a call to his office on Sunday night. He is seeking to interview top Vatican officials, including the pope, in the case.