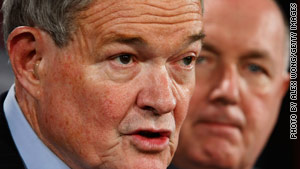 Washington (CNN) -- The top Republican on the Senate Intelligence Committee says he doesn't yet see the evidence to support Obama administration claims that the Times Square bombing suspect was working on behalf of the Pakistani Taliban.

Sen. Kit Bond, R-Missouri, also is criticizing Attorney General Eric Holder for launching what he calls a "hostile takeover" of the intelligence community.

In a written statement released on Wednesday, Bond accused the Justice Department of violating the National Security Act by not allowing intelligence agencies to provide congressional oversight committees information the agencies had gathered about alleged Times Square bomber Faisal Shahzad.

"Instead of complying with the law and getting timely information to Congress, the Attorney General and Administration officials were busy spinning the Times Square story in the press," Bond in the statement.

Justice Department spokesman Dean Boyd denied Bond's accusation. "The Justice Department did not order any U.S. intelligence agency to decline to cooperate with Senator Bond in connection with the Shahzad case," said Boyd. He pointed out that law enforcement and intelligence officials briefed appropriate House committee staff and leadership last week, and those on the Senate side this week.

On ABC's "This Week" Sunday, Holder said the U.S. had evidence the Pakistani Taliban, an extremist group with ties to al Qaeda, was behind the attack. "We know that they helped facilitate it. We know that they probably financed it and that he (Shahzad) was working at their direction," the attorney general said.

John Brennan, the assistant to the president for counterterrorism and homeland security, told CBS's Face the Nation that it was "clear that Faisal Shahzad was working on behalf of the (Pakistani Taliban) ... he received funding from them."

After the Senate Intelligence Committee was briefed on Tuesday, Bond told reporters he was frustrated by what he called being kept in the dark for 10 days. And he said statements made by Holder and others over the weekend were not supported by the intelligence he had seen.

"We hear there's lots of strong suspicions and lots of trails they are following," said the senator. "I'm not convinced by the information I've seen so far that there was adequate, confirmable intelligence to collaborate the statements that were made on Sunday television shows," he added.

Senate Intelligence Committee Chairwoman Dianne Feinstein, D-California, disagreed with Bond's contention, but said she would not debate it in public. Feinstein did say that based on the intelligence she had seen "there is a high likelihood that he (Shahzad) did have training in Pakistan..from the Taliban."

And Justice Department spokesman Boyd said the administration stands by the statements made by Holder and Brennan on Sunday.

A U.S. counterterrorism official said there is "no doubt" of a connection between the Pakistan Taliban and Shahzad, but the extent of that linkage is still not clear. "More time is needed to put meat on the bone," said the official.