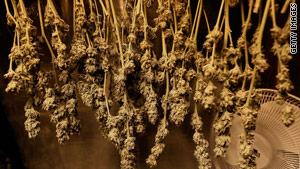 Billings is a town of about 100,000 and has had nearly 90 applications for medical marijuana storefronts, police say.
STORY HIGHLIGHTS
RELATED TOPICS

(CNN) -- The Billings, Montana, City Council will take up the issue of regulating medical marijuana on Monday night in a meeting expected to be intense in the wake of the firebombings of two of the city's medical marijuana storefronts in the last two days.

The southern Montana city's dispensaries legally provide marijuana to medical patients who use it for maladies from glaucoma to nausea to lack of appetite. In the latest incidents, the phrase "Not in our town" was spray-painted on the businesses, police say.

Police Sgt. Kevin Iffland said Big Sky Patient Care was hit early Sunday morning and Montana Therapeutics was the target early Monday. Both had a rock thrown through the front door, followed by a Molotov cocktail. In both cases, Iffland said, the fire was put out swiftly and damage was not extensive.

Iffland said Billings police are working with the U.S. Bureau of Alcohol, Tobacco, Firearms and Explosives and that the two firebombs are being handled as felony arsons carrying sentences of up to 20 years in prison and a $50,000 fine.

The attacks on the storefronts come as the Billings City Council considers a moratorium on licensing new dispensaries while it works up a regulatory ordinance.

Sixty-two percent of Montanans voted in 2004 to allow caregivers to grow marijuana for qualified patients, but the state law said nothing about distribution. In that absence, municipalities and county governments began licensing the establishments on their own.

But, Iffland said, Billings was ill-prepared for the number of applications and has very little regulation in place. Billings, he said, is a town of about 100,000 and has had nearly 90 applications for medical marijuana storefronts -- and some residents are angry. He fully expected a heated council meeting.

Meanwhile, investigators are still reviewing evidence in the firebombings and are working with one of the businesses that has surveillance video but is reluctant to hand over the tape because of privacy concerns.

While the investigation is ongoing, police have stepped up patrols in the areas where the medical marijuana storefronts are located, Iffland said.