Times Square package turns out to be false alarm 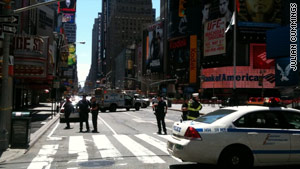 Investigators determined that a suspicious package in Times Square contained only water bottles.

New York (CNN) -- A suspicious package in Times Square prompted an evacuation and raised alarms in a jittery city Friday afternoon until authorities determined it was a false alarm.

Investigators determined after an anxious hour or so that the suspicious package -- a green cooler -- contained only water bottles.

The cooler was found near 45th Street and Broadway, outside the Marriott Marquis hotel, witnesses and police said. That's near where authorities say a U.S. citizen of Pakistani descent left a car bomb that failed to detonate six days before.

Police evacuated parts of Times Square around 1 p.m. ET as they investigated, though people remained in the hotel and nearby buildings, said Kathy Duffy, a hotel spokeswoman.

"Our buildings were not evacuated," she said. "Our hotel has not been evacuated."

Many took it in stride. Seconds after the police tape came down and cars resumed driving down 7th Avenue, theater fans lined up at a half-price booth to purchase show tickets.

"I'm not afraid of that -- been around too long," said Pete Dloss, a 76-year-old tourist from Florida, who stood at the front of the line waiting to buy four tickets to "La Cage Aux Folles."

"I wasn't afraid," said Mike Day, a tourist from Newfoundland, Canada, who was waiting to buy two tickets for "Billy Elliot" on Broadway. "All part of the experience. You assume it was a false alarm."

A spokesman for the New York Police Department said officials get 90 to 100 calls per day, on average, about suspicious packages or vehicles. Only a fraction of those are investigated by the bomb squad, said Sgt. Kevin Hayes.

In last week's car bomb case, authorities say that Faisal Shahzad, an American citizen who is originally from Pakistan, left a car bomb in Times Square that failed to detonate.

Investigators arrested Shahzad after he had boarded an airplane with plans to leave the United States, authorities said.

Mayor Michael Bloomberg of New York acknowledged after that incident that terrorists have targeted New York.

"We have to take every precaution, as you know, because we remain a prime target for terrorists," he said. "That's something all New Yorkers understand and it's something that we need Washington to understand as well. ...

"We will continue to doing everything we possibly can to protect New Yorkers from terrorist attacks. We have, as you know, built the most comprehensive and sophisticated counterterrorism operation of any local police force in the world."