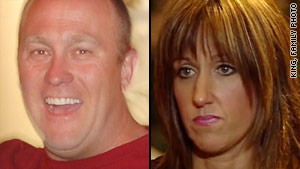 James Sanders was shot and killed in a home invasion after he and his wife placed an ad in Craigslist.

(CNN) -- Four suspects have been charged with first-degree murder in connection with a home invasion that began with an ad on Craigslist, Washington state authorities said Friday.

Three of the suspects were arrested on May 1. A fourth suspect, Clabon Terrel Berniard, 23, turned himself in Thursday, police said. Berniard and the others are accused of killing a man on April 28 in Edgewood, a city outside Tacoma. They are charged with first-degree murder, robbery and assault.

The case began when James Sanders and his wife posted an ad on Craigslist offering a diamond ring for $1,050, said Pierce County Prosecutor Mark Lindquist. Sanders arranged to meet prospective buyers of the ring at the family's home, the prosecutor said.

"Two people show up and act like a couple looking for a ring for the mother-in-law," Lindquist said. But once they entered the house, he said, the man posing as the husband pulled out a handgun.

The victim, his wife, and their sons, ages 14 and 10, were restrained with plastic handcuffs, Lindquist said. Two other suspects then entered the home. One pistol-whipped the older son, he said.

Sanders broke out of his restraints and attempted to defend the 14-year-old, and was shot three times, the prosecutor said.

"While this is going on," Lindquist said, "other bad guys are kicking Mom in the head while she's lying on the floor."

The three suspects arrested in May were caught in California after a traffic stop. They have been identified as Kiyoshi A. Higashi, 22, of Tacoma; Joshua N. Reese, 20, also from Tacoma; and Amanda C. Knight, 21, from Sumner.

Knight posted bail in California and subsequently surrendered to authorities in Sumner on Tuesday, authorities said. She pleaded not guilty at her arraignment. Her bail was set at $2 million.

Higashi, Reese and Berniard are expected to be arraigned next week.

The killing came a year after a medical student in Boston, Massachusetts, was charged with killing a woman who advertised a massage service on Craigslist.

"You hate to tell people to be wary of your fellow citizens, but the reality is you've got to be wary when you are doing something when interacting with strangers on Craigslist," prosecutor Lindquist said.

"This is a cautionary tale."