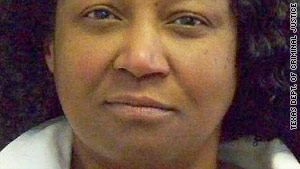 Linda Carty, a grandmother and one-time teacher, was sentenced to death in 2002.
STORY HIGHLIGHTS
RELATED TOPICS

Washington (CNN) -- A British woman on death row in Texas, convicted of murdering a young mother, had her latest appeal set aside by the Supreme Court.

State corrections officials can now proceed with setting an execution date, but there is no indication when that will happen. The justices without comment on Monday refused to review her case.

Linda Carty, 52, has made a public plea to British citizens, asking them and human rights groups to intervene and win her clemency.

Carty, a grandmother and one-time teacher, is from the West Indies nation of St. Kitts, a former British colony. She moved to Texas when she was 23.

She was convicted of taking part in the May 2001 murder of Joana Rodriguez, a 25-year-old Houston-area woman. According to the trial record, Rodriguez and her 4-day-old son were abducted by men demanding drugs and cash. Two other people inside the home were beaten and tied up.

The young mother was bound with duct tape, a bag was taped over her head and she was placed in the trunk of a car. Police said Rodriguez died from suffocation, while her son survived.

Prosecutors convinced a jury that Carty had hired the three men to kidnap Rodriguez, so she could steal her baby because she was no longer able to get pregnant. Evidence was presented to show Carty tried to masquerade as a new mother in order to rebuild her relationship with a boyfriend.

She was sentenced to death in February 2002. She is one of 10 female prisoners on a special death row at the Mountain View prison in Gatesville, Texas.

Carty asserts her innocence, and her appellate legal team claims her original trial was "catastrophically flawed." Among the allegations filed in various appeals are that her court-appointed lawyer was incompetent and failed to meet Carty until immediately before the trial, failed to spot flaws and inconsistencies in the prosecution's case, failed to interview witnesses and did not look at key mitigating evidence.

Reprieve, a British human rights groups serving as her new legal team, also said she should have been given access upon arrest to the British consulate.

The British Foreign Office has filed two amicus briefs in U.S. federal courts in Carty's case, which complain that Britain was not notified of her original arrest, said a Foreign Office spokesman who declined to be named, in line with policy. The Foreign Office remains in close touch with Carty and her legal representatives, the spokesman said.

"We're continuing to provide her with consular assistance," he said. "We've also made the U.S. aware of our stance (against) the death penalty."

State and federal courts have rejected her various appeals.

Last year, Carty recorded a seven-minute message pleading for her life. "Please listen and tell everyone you know," Carty said on the tape. "Please don't let me die here. I'm sorry if I sound like a desperate woman. I am desperate. The British people may be my last hope."

Regarding her trial, Carty said, "My lawyer told me he was too busy to work on my case."

Human rights activists launched a three-month project in London, England, last summer, playing her recording on a daily basis, and urging passers-by to get involved. Standing atop one of Trafalgar Square's large statue bases, or plinths, Brian Capaloff, one of those activists, held up placards with messages from Carty and stood in front of a life-size cardboard cutout of her.

"This is about someone's life and there's nothing more important than that," the Scottish man told CNN in September. "It is an emotional thing."

In other appeals before by the Supreme Court:

• The justices decided not to review whether the Boy Scouts could lease city parkland, after controversy over its policy banning atheists and homosexuals from being members or volunteers. An agnostic couple and their son, and a lesbian couple and their son challenged San Diego, California's, granting of city leases to the Scouts, which for years has run a campground and aquatic center in Balboa and Mission Bay parks. Lawsuits were filed after the city had extended a 50-year-lease.

The Supreme Court let stand a federal appeals court ruling saying that the scouts are a religious organization, making the lease improper, and that the families have constitutional "standing" to challenge the lease.

Federal law bans discrimination based on sexual orientation by religious groups, as well as government "endorsement" or promotion of religion. The national scouting organization denies it is religious in nature, despite a policy that youngsters should "do duty to God."

• Delaware was denied the chance to broaden its state-run sports betting lottery beyond its current form involving professional football. The high court without comment let stand a lower court ruling limiting betting in the state to so-called "parlay" or multigame bets on National Football League games. The state wanted to offer single-game bets on a variety of professional and amateur sports and events in an effort to reduce its widening budget deficit.

The NFL, the NCAA and Major League Baseball sued, saying the federal government had earlier banned that kind of sports betting. Delaware had been exempt from the 1992 law because it had earlier created a multiple-game wagering lottery similar to the current system.

The case is Markell v. Office of Commissioner of Baseball (09-914).