Personal assistant gets 27 to life in celebrity realtor's murder 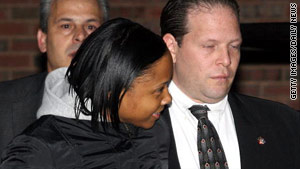 New York (CNN) -- The personal assistant to "realtor to the stars" Linda Stein was sentenced Monday to 27 years to life in prison for stealing from Stein and beating her to death in her Park Avenue apartment.

"An old and wise adage: The truth will come to light. Murder cannot be hid long," the judge said.

Lowery was convicted in February of second-degree murder in Stein's 2007 slaying. She also was found guilty of stealing thousands of dollars from Stein.

Lowery received 25 years to life for the murder and at least an additional two years for the larceny convictions.

She read from a three-page written statement, her voice barely audible in a crowded courtroom ringed with a dozen deputies.

"The fight has just begun," she said. "My innocence will continuously remain as it did since October 30, 2007. This case was turned into a media circus, it was never about evidence."

"I toss and turn, unable to sleep because of the vivid imagery of my dead mother," said the victim's daughter, Mandy Stein. She found her mother's bludgeoned body.

Where is your apology? You can't even look me in the eye.
--Samantha Stein-Wells, victim's daughter
RELATED TOPICS

Her older sister, Samantha Stein-Wells, directed her comments to Lowery.

"Natavia, there's so much I want to say to you but cannot say in this courtroom. I'm a lady," she said. "Where is your apology? You can't even look me in the eye. Natavia, you know the truth. You will forever live the legacy of a murderer and a thief."

Lowery had given detectives a written and verbal confession, which she later recanted, according to police and prosecutors.

Prosecutors had asked for the maximum sentence, 40 years to life in prison.

Stein "had no idea she was letting in a sociopath" when she hired Lowery, she said.

Brenner, who didn't try the case, was emotional in court, saying he was outraged that Lowery was expected to apologize or show remorse for something she says she didn't do.

Stein, 62, was one New York City's top real estate brokers and was known for her list of celebrity clients, including Madonna, Sting, Michael Douglas and Angelina Jolie.

She got her first taste of the limelight as manager of the Ramones -- a legendary 1970s punk rock group of the 1970s.

Stein was found dead in her posh Fifth Avenue apartment in October 2007, a victim of "blunt impact injuries of the head and neck," the New York medical examiner's office said.

Police said no sign of forced entry was found at the apartment.

Lowery told police that Stein had been verbally abusive to her and on the day of the murder had blown marijuana smoke into her face and waved a "yoga stick" at her, NYPD Commissioner Ray Kelly said at the time.

Lowery's only known previous arrest stemmed from an identity theft case in 2006, in which she stole another woman's identification and used it to get a credit card in her name, Kelly said.