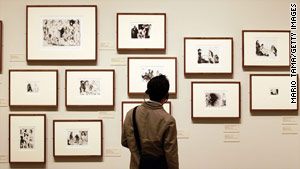 These works by Picasso are the real deal, but a California art dealer wanted to sell a fake Picasso for $2 million.
STORY HIGHLIGHTS
RELATED TOPICS

Then sell the fake as an original for $2 million.

She may have not counted on the feds getting involved.

That woman, 70-year-old Tatiana Khan, agreed to plead guilty to federal charges related to the sale of the phony Picasso, authorities said Tuesday.

The woman is scheduled to appear in federal court next month to plead guilty to felony counts of making false statements to the FBI and witness tampering, federal authorities said.

"Khan falsely told an FBI agent who was investigating the sale that Khan had obtained the drawing from an acquaintance," a Department of Justice statement said. "Khan also admitted that she told the art restorer to lie to the FBI by saying that she only did restoration work for Khan and did not do any copying work."