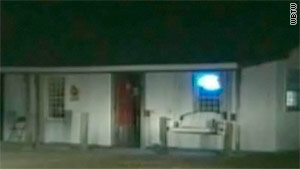 (CNN) -- Three men were sentenced to prison for forcing an African-American man out of a South Carolina convenience store, threatening him with a chainsaw and stealing his car, an incident the Department of Justice said was fueled by hate.

The defendants admitted that the elder Blue "forcibly escorted" Moore out of a Marlboro County, South Carolina, store known as the Stop and Shop after he entered to use the restroom, the statement said.

"Once outside, the elder Blue forced the victim to the ground and Blue Jr. threatened the victim with a chainsaw while a small crowd watched," according to the Department of Justice statement.

While the attack was occurring, Talbert stole Moore's car, authorities said. Later, the elder Blue used a pistol to threaten two white men who he thought were trying to help the victim, including one who showed up to retrieve Moore's car.

All three men waived their right to appeal, according to court documents.

The elder Blue's attorney, Jack Swirling, called the incident "most unfortunate" and "totally unacceptable." His client, he said, is very remorseful, adding that the incident would not have occurred but for Blue's heavy drinking that day.

Kirk Truslow, the younger Blue's attorney, said his client had apologized to Moore and his family and "wishes this never would have happened." The case "went a long way in making some changes in the area," he said.

"I think it really made an impact," Truslow said. "Everyone in this area took notice."

Talbert's attorney, Morgan Martin, called the incident "regrettable" and said his client is sorry it happened.

"This case is a reminder that violent acts fueled by bigotry and hate continue to happen all too frequently in our nation, even in 2010," said Thomas Perez, assistant attorney general in charge of the Justice Department's civil rights division.

"This senseless, terrifying assault was quite simply the product of hate," said Kevin McDonald, acting U.S. attorney for the District of South Carolina. "I expect others tempted to act out in violent racism to take note of this prosecution and the sentences imposed."