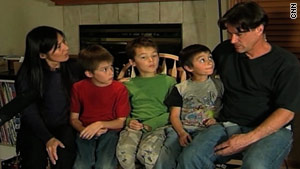 The Heene family during interview on "Larry King Live" the night of the balloon hoax.
STORY HIGHLIGHTS
RELATED TOPICS

(CNN) -- Richard Heene, the man who pulled a hoax by saying his 6-year-old son was drifting over Colorado in a balloon, must pay $36,000 in restitution, a judge has ordered.

As Heene completed his 90-day sentence with home detention this month, his wife, Mayumi Heene, began serving her 20-day sentence on weekends, according to a jail official. Her time is not spent in a jail cell, but on a Saturday and Sunday work detail, a probation official said.

Prosecutors said the couple staged their son's disappearance on October 15, 2009, to generate publicity for themselves because they wanted to star in a reality television show.

Richard Heene pleaded guilty in November to a felony count of attempting to influence a public servant, while she pleaded guilty to a misdemeanor of making a false report. The judge also sentenced the couple to four years probation.

Richard Heene initially told authorities that his son, Falcon, was drifting over eastern Colorado in a homemade balloon that had come loose from its moorings in the family's backyard. Authorities raced to track the balloon while puzzling over ways to rescue the boy inside. Their efforts received widespread news coverage that riveted people around the nation.

Watch the "Aha moment" in the CNN interview