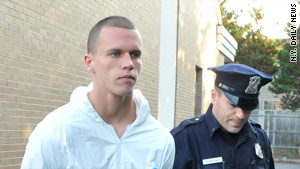 Jeffrey Conroy was convicted of manslaughter as a hate crime in the slaying of Marcelo Lucero.

New York (CNN) -- Jurors on Monday convicted a Long Island man of manslaughter as a hate crime in the death of an immigrant from Ecuador.

Jeffrey Conroy was on trial for the death of Marcelo Lucero, a 37-year-old native of Ecuador who was fatally stabbed in the chest on November 8, 2008, in Patchogue, New York.

Conroy was also found guilty Monday of gang assault and conspiracy as well as of assaulting three other Latino men on Long Island.

He was found not guilty of murder as a hate crime, the most serious charge he faced.

"He will live prisoner in his conscience for what he did," the victim's mother Maria Rosario Lucero told reporters in Spanish. "May God forgive him for the acts he committed."

She was planning to travel Monday to view the location in Patchogue where her son was killed.

Prosecutors say Conroy and six friends in 2008 targeted Latinos for assaults -- part of a sport they called "beaner-hopping."

Several of the seven defendants pleaded guilty to various charges.

But Ecuadorian government representatives said they would have preferred a conviction for murder in the second degree.

"We are not satisfied with the decision," said Pablo Calle, the New York spokesman for the Ecuadorian National Secretariat of Migrants. "There is no happy ending in a situation like this."

"Everyone has lost," said Jorge Lopez, consul general of Ecuador in New York. "We are very unsatisfied with the result."

He beseeched the Ecuadorian community on Long Island not to be afraid of approaching authorities for help.

"What Long Island is doing is sending the wrong message to the country," Sinche said. "These crimes have to stop and they have the power to do it, and they didn't do it."

Spota expressed satisfaction with the jurors' verdict. "I think that they arrived at a fair verdict based upon the evidence that we have presented," he told reporters.

"The verdict this jury announced will forever be a part of the legacy of Marcelo Lucero and that legacy is simply that the law protects everyone, no matter who they are, where they came from, what language they speak, and no matter what their immigration status may be," he said.

The indictment had charged Conroy with both murder and manslaughter, a rare move, Spota said.

"We felt and, obviously, the grand jury felt that this was the proper decision: let a trial jury make that determination."

Manslaughter in the first degree carries a sentence of eight years to 25 years. Sentencing is set for May 26.

Conroy's lawyer said he would appeal.

A recent report from the Southern Poverty Law Center found that Latinos in Suffolk County, which occupies about two-thirds of Long Island, have lived in an environment of intolerance and violence directed at them. The atmosphere of intolerance was stoked in part by anti-immigrant groups and some county leaders, along with an indifferent police department, according to the report.

The law center, which researches and keeps tabs on hate groups, became interested in the Long Island county after Lucero's death.

After four months of research in Suffolk County that included interviews with more than 70 Latino immigrants, 30 local religious leaders and other community leaders, the law center said it found a pattern of ethnic intolerance going back 10 years.

Low-level harassment of Latinos in Suffolk County is common, the report said. "They are regularly taunted, spit upon and pelted with apples, full soda cans, beer bottles and other projectiles," the report said.

Latino residents riding bikes have been run off the road, and others have been beaten with baseball bats or shot at with BB guns, the report said.

CNN producer Brian Vitagliano at the courthouse contributed to this report.