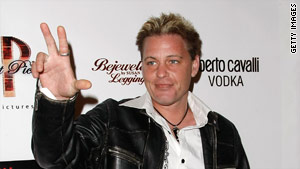 Corey Haim, in a photo from November, died in March. The coroner's ruling on the cause of death is expected this week.
STORY HIGHLIGHTS

Los Angeles, California (CNN) -- The Los Angeles coroner's ruling on what killed Corey Haim last month should be released this week, according to an investigator.

While those closest to the 1980s teen actor say they don't think he overdosed, California Attorney General Jerry Brown last week called Haim "the poster child" for the problem of addicts "doctor shopping" for dangerous drugs.

Haim, 38, died on March 10 after collapsing at the Los Angeles apartment he shared with his mother.

The coroner has been waiting on toxicology lab results before deciding the primary cause of Haim's death, Los Angeles County deputy coroner Ed Winter said. With that completed, the coroner is wrapping up the autopsy report, he said.

The initial autopsy examination revealed Haim suffered from pneumonia and had water on his lungs and an enlarged heart, Winter said.

His family suspected Haim's sudden death was caused by a bad reaction to a single pill given to him by an addiction specialist who was treating Haim, his manager Mark Heaslip said.

Video: Milano: we tried to get Haim help
RELATED TOPICS

Although he battled drug addiction for decades, his death came when Haim "was making major progress" with a program to wean him from pills, Heaslip said.

Brown launched a probe of what he said was Haim's "doctor shopping" for drugs. Seven different doctors gave him prescriptions for four controlled substances in the last 10 weeks of his life, Brown said.

The deputy coroner revealed last month that Haim obtained drugs using prescriptions written under the names of 20 Los Angeles doctors in the past year. The coroner subpoenaed medical records from those doctors.

State agents arrested one person last month in connection with what Brown said was a massive drug ring that obtained and sold the counterfeit prescription pads.

Haim sometimes threatened to find other doctors to prescribe him drugs when his primary physician wouldn't give him what he wanted, his manager said.

"I would be the only one who could talk him out of it," Heaslip said Monday night.

His doctor was providing pills only in one-day supplies in an effort to wean him, Heaslip said.

His manager said that if Haim was cheating on his addiction program, he would probably not have admitted it to him, since Heaslip would have dropped Haim as a client.

Haim's primary care doctor would constantly follow up with urgent care centers that he believed were writing prescriptions for Haim, Heaslip said. The doctor later gave the information to investigators, he said.

Simpson, of the state task force, confirmed to CNN that Haim's doctor was helping investigators.

Haim began his acting career in 1982, with his first television appearance on the Canadian series "The Edison Twins." His first film role was in the 1984 American movie "First Born."

His most famous role was in the 1987 movie "The Lost Boys," in which Haim played a fresh-faced teenager whose brother becomes a vampire.

In recent years, the actor was reunited with longtime friend and frequent co-star Corey Feldman in a reality show. "The Two Coreys" ran for two seasons on the A&E Network before it was canceled.