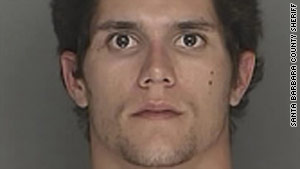 Joshua Graham Packer, 20, is being held in the slaying of a couple in their California beach house.
STORY HIGHLIGHTS
RELATED TOPICS

(CNN) -- Police have made an arrest in the home invasion slaying last year of a Southern California couple in their beach house, authorities said Monday.

Packer is accused of murdering Brock Husted, his wife, Davina Husted, and her fetus. The Husteds, who were both 42, were stabbed to death in their seaside home in Faria Beach, California, on May 20.

Chief Gary Pentis of the Ventura County Sheriff's Department said it appeared the suspect targeted the victims. "My personal opinion? This was not a random act," Pentis said at a news conference Monday.

Until the couple's slaying, the gated community of luxury homes had not recorded a homicide in 15 years, police said.

According to investigators, the Husteds were home with their two young children on the night of the slaying. Their daughter was asleep in bed, and their son was watching "American Idol" in the living room.

About 10:30 p.m., the suspect entered the home through French doors that face the ocean, police said.

The killer was dressed in dark clothing and wore a motorcycle helmet, authorities said. He walked past the child who was watching television and stabbed the Husteds.

The home was not ransacked, and the alleged murder weapon was left at the scene, Bonfiglio said.

A sample of Packer's DNA taken after an arrest in Santa Barbara matched the genetic material found at the Husted crime scene, said Pentis the sheriff's department chief. He added that items from the victims' house were found at the suspect's home.

"This in no way takes away the loss our family has had. Brock was our baby brother."

Packer is being held on $2.2 million bail at the Ventura County Main Jail.