By Mayra Cuevas-Nazario, In Session 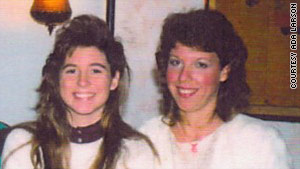 Ada Larson fought the release of crime scene photos of her daughter, Sonja, in the 1990s.

(CNN) -- Recent court fights over the videotape of a killer whale attack at SeaWorld in Florida and a writer's request for investigative photos of a slain Georgia hiker's body are rekindling a familiar debate.

The question: Where should the line be drawn between the public's right to know and a crime victim's family's right to privacy?

It's an issue Ada Larson knows well from painful experience. Her daughter, Sonja, was murdered in 1990 by a serial killer known as the Gainesville Ripper.

"We did not want our loved ones to be put out there in the scenes where they where found, because he was a butcher, and he was cruel," Larson said from her home in Florida.

Along with the families of the other victims, Larson fought in court to seal the autopsy and crime scene photos. After a contentious hearing, Alachua County Judge Stan R. Morris ruled to allow the public and the media to view 700 grisly crime scene and autopsy photos, under the condition that no copies could be made.

"The spirit of the ruling is very clear, you have two competing interests, and they are both valid. You have the public's right to inspect how their money is being used but there is a way that you can accomplish that and respect the rights of the families to privacy," Morris, now retired, told CNN in a phone interview from his home in Florida.

"In 16 years, no one has ever challenged it," the judge said.

Larson never saw the photos and said she cannot imagine what her life would have been like if they had been released to the public.

"It stays with you forever," Larson said. "I don't think you are ever able to heal from that loss. I don't know how I could have done it without my faith."

I would respect the family; it is them who are going through this loss.
--Ada Larson, murder victim's mother

Larson sees no need to release the video showing the death of SeaWorld trainer Dawn Brancheau, 40.

"I would respect the family; it is them who are going through this loss. Why do people need to know more than that?" she said.

In March, Florida Circuit Court Judge Lawrence Kirkwood granted a temporary injunction against the release of the video and ordered mediation for all parties wanting access.

Florida media attorney Rachel Fugate, who specializes in First Amendment and public access cases, will be participating in the mediation on behalf of The Orlando Sentinel, The Tampa Tribune, The Lakeland Ledger and WFLA-TV.

"We are not advocating that the photographs be released or that they be published or broadcast in any manner," she said. "We want the opportunity to inspect."

As Fugate sees it, the public is served by the independent verification the media can provide, especially in cases involving competing or inconsistent versions of events.

"We certainly understand their privacy interest and want to protect them," she said. "We hope the limited viewing would protect that right."

As the SeaWorld case goes forward, Fugate is looking at the precedent set during the 1990 Gainesville killings.

Morris found that allowing the public and media to privately inspect but not distribute the investigative photos posed no risk that the victim's families would be exposed to them.

Jon Mills, the attorney for Brancheau's family, represented the families in the 1990 Gainesville killings. He also fought the release of autopsy photos on behalf of the families of NASCAR driver Dale Earnhardt and Italian fashion designer Gianni Versace.

"The judge should balance the horrific nature of the photographs versus the public value of disclosure," said Mills, a former dean of the University of Florida Law School. "Least exposure is the best option, but we will have a discussion with the media to protect the family and the media's right."

Mills and media attorney Tom Julin worked on opposite sides during the Gainesville 1990 killings and the Dale Earnhardt case. Julin represented the University of Florida's student-run newspaper, The Independent Florida Alligator.

The public needs to see the evidence for themselves.
--Tom Julin, media attorney
RELATED TOPICS

Julin says the Earnhardt case was of particular importance because it proved first-hand the need for independent verification.

After Earnhardt's death during a race, NASCAR announced the results of an internal investigation that concluded that a faulty seat belt harness was to blame for his fatal head and neck fractures.

Skeptical of these findings, media outlets attempted to obtain Earnhardt's autopsy records and photos, but the family filed an injunction to seal these documents.

After mediation, the media agreed to appoint an independent expert to review the autopsy documents and file a report. The report concluded that Earnhardt's death was the result of inadequate restraints, not a broken seat belt harness. The findings led to several safety improvements in the race car industry.

To maintain the integrity of an open court system, "the public needs to see the evidence for themselves," Julin said.

"We have an open judicial system, and we have to keep it open in order to maintain confidence in the system," he said. "You have confidence that law enforcement has made the right decision."

He sympathizes with family members of crime victims and believes there is a way to protect them without compromising public confidence.

"When you are a victim of a crime, there is a natural tendency to want to conceal, but there are other interests to balance when someone is on trial," Julin said. "You don't want the photos so widely distributed that it causes unnecessary pain to the family."

Although 20 years have passed since her daughter's murder, Larson still sometimes relives the crime and its aftermath.

"I go over what happened in my mind sometimes and how she must have struggled," she said. "I do go over it, but the Lord gives me peace. It changed me immensely. Nothing was the same anymore."

Julin says legislators are quick to overreact during high-profile cases and "don't think of the broader issue." He cited Georgia House Bill 1322, the Meredith Emerson Memorial Privacy Act, as an example.

The bill, now in the Georgia Senate, was enacted after a writer for Hustler magazine requested crime scene photos of 24-year-old hiker Meredith Emerson, whose naked body was found decapitated in the north Georgia mountains.

If signed into law, Georgia House Bill 1322 will prohibit the disclosure of any photos or video that "may depict or describe the deceased nude, grossly dismembered, or decapitated."

He believes, however, that it is not in the public's best public interest to conceal the workings of the court. "These cases cost the public millions of dollars and people's lives are on the line," Morris said.