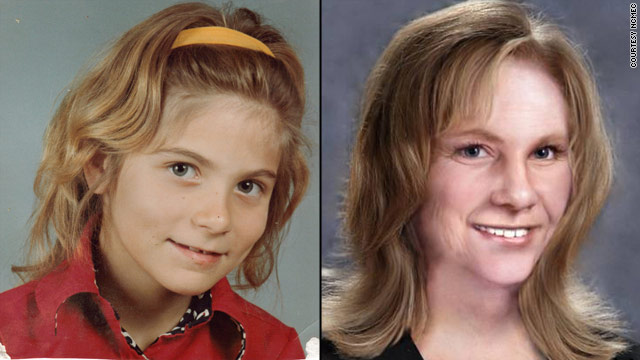 Kimberly King was 12 when she disappeared. She would be 43 now, and might look like the photo on the right.
STORY HIGHLIGHTS

New York (CNN) -- Before she was laid to rest in 1995 in a cemetery in Clinton, Kentucky, 77-year-old Anna Laura King bought a plot next to her own.

The burial space, which remains empty, is reserved for her granddaughter, Kimberly King, who disappeared 30 years ago. She was 12.

"That's all I can hope for that before I die I get to see her at least placed there,'' said Kathie Lucas, one of Kimberly's two sisters.

Investigators have no clear evidence to tell them whether Kimberly is dead or alive, but Lucas says she has faint hope that her sister is alive. "Hasn't it really reached a point almost in our society that it's impossible to hide who you are?'' she said.

On September 15, 1979, Kimberly was staying at her grandparents' home in Warren, Michigan, and planned to sleep over at the house of her friend, Annie, who lived across the street from them.

Kimberly wanted to see a movie with her older sister, Kathie, that evening but their father's car wasn't available to them.

"Hasn't it really reached a point almost in our society that it's impossible to hide who you are?''
--Kathie Lucas, missing girl's sister

Another sister, Konnie, reported that she received a phone call from Kimberly at 11 p.m., Lucas said. Kimberly said she was at an outdoor pay phone a short walk from their grandparents' home.

Kimberly had sneaked out of Annie's house through a window in her bedroom, and Konnie told her to go back because it was too late to be running around outside.

Kimberly was reported missing the next day. But strong clues or evidence have been lacking in this case. Investigators don't even know the location of the pay phone Kimberly used.

Months later, a witness told police he had seen Kimberly using a phone at about 11 p.m. that night, several miles from her grandparents' home.

No search warrants were sought to trace the phone call, said Detective Ken Marsee of the Warren Police Department. The information could have developed into a lead but it's impossible to know in hindsight, he added.

These days it would be a different story, he said, because public cameras and private cell phones leave a constant electronic trail of a person's locations and activities.

"Initially, from what I could tell, the detective assigned the case thought she was a typical runaway and would be back in a couple of days,'' Marsee said. "But obviously she met up with foul play because we never heard from her again.''

The case is open, and Marsee said he is actively pursuing other leads, but declined to disclose more.

Marsee took over the investigation a few years ago, and Kathie Lucas praises his efforts, including a decision to take DNA samples from family members in case remains are ever found. But she said the department handled the case badly at the beginning.

Obviously she met up with foul play because we never heard from her again.
--Detective Ken Marsee
RELATED TOPICS

Lucas had run away and come back home several times as a child, she said. "The police had the attitude that this was just the same thing happening again with the next kid," Lucas added. "I think that they probably lost a lot of valuable time by thinking that.''

The police case file indicates that Kimberly would occasionally stay out most of the night but always came home, Marsee said. But he found nothing to indicate she was a runaway.

The early years of the investigation also featured another distraction. There were repeated false sightings of a girl who was about the same age as Kimberly, hung out at the same places and, according to Marsee, "eerily looked like Kim.''

She eventually came to the precinct, was photographed and police were able to establish that she was not Kimberly, Marsee said.

Lucas said she "pestered every friend Kim ever had, every friend of a friend'' as she conducted her own investigation. She thinks a stranger abducted her sister.

Kathie Lucas was 16 when Kimberly disappeared. She remembers her sister as physically active and enjoying the family dog. She keeps a papier mache turtle that Kimberly made in elementary school.

Lucas, who has two grown children, says what happened to her sister shaped her own parenting methods. She never let her kids out of her sight, she said, and pushed back when people told her she was overprotective because kids "do disappear.''

Even today, Lucas gets angry when she sees parents let their toddlers roam freely in restaurants.

"They're over by the men's room or by the exit door and I just want to shake the parents and say, 'In a second that baby could be gone,' '' she said.

Kimberly, who would be 43, was 5 feet 5 inches tall and 105 pounds when she vanished. She had brown hair at the time and was wearing a blue sweater and Levi's jeans.

Anyone with information on this case is asked to call The National Center for Missing & Exploited Children at 1-800-THE LOST or the Warren Police Department at 1-586-574-4705.