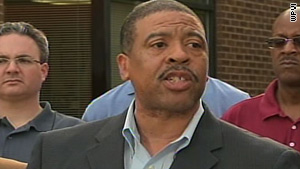 (CNN) -- Police in Trenton, New Jersey, on Saturday announced more arrests in the case of a 15-year-old girl who allegedly allowed men to have sex with her and her 7-year-old stepsister for money.

Two men and three boys, ranging in age from 13 to 20, have been charged with aggravated sexual assault and endangering the welfare of a child, Trenton Police Director Irving Bradley said at a news conference Saturday evening.

Gregory Joseph Leary, 20, was arrested and charged Thursday. Police announced the arrest and charges against Tiemear Lewis, 19, on Saturday. Both men are from Trenton.

Police also announced charges against the juveniles, ages 13, 14 and 17 on Saturday. Their names are being withheld.

More arrests are expected in the case, authorities said.

Police say they believe as many as seven men and boys paid for sex with the two girls during a party Sunday night.

"We're not finished because everyone that is responsible is still not arrested," Trenton Mayor Douglas Palmer said. "The police will not rest until we get every individual who was involved in this,"

Officials say the 15-year-old was baby-sitting her stepsister on the afternoon of March 28 when she encountered two males who invited her to "hang out" with them. She agreed and brought the 7-year-old along to an apartment.

Molestation of the 7-year-old "quickly escalated to rape," Juniak said. The men held her down and said they would kill her if she screamed, he said.

The 7-year-old was found after she left the building by two women who escorted her home, according to police.

The older girl is charged with aggravated sexual assault, criminal restraint, endangering the welfare of a child, and promoting prostitution, police said.

The case outraged the Trenton community and put authorities under immense pressure to make arrests.

Early Thursday morning, police conducted a raid at Rowan Towers, the public housing apartments where the assault occurred, and arrested 27 men and women on outstanding warrants from unrelated cases. Some residents said they were upset and frightened by the raid, but that it was time police started paying attention to the building.

Several Rowan Towers residents said the empty apartment where the attack occurred was known as a place "where trouble happened." One elderly female resident said groups of young men and women would go there and hold drug- and alcohol-fueled parties "at all hours of the night."

Trenton authorities said Saturday that the cooperation of community members was key to making the arrests.

"People came forward to get justice for this innocent 7-year-old angel who was brutally gang-raped by a bunch of pedophile animals," Palmer said.

CNN's Cameo George and Nicole Bliman contributed to this report.