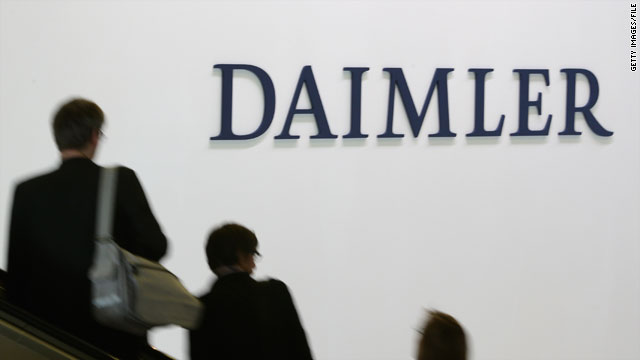 The carmaker and three subsidiaries are to pay $185 million in criminal fines and civil penalties.
STORY HIGHLIGHTS

Washington (CNN) -- German carmaker Daimler AG and three of its subsidiaries pleaded guilty in U.S. federal court in Washington to bribing government officials with tens of millions of dollars in Russia, China and 20 other countries, the Justice Department announced.

U.S. District Court Judge Richard Leon ordered Daimler to pay $93.6 million in criminal fines, and $91.4 million in civil penalties. The civil fines represent the restitution of profits made in the illegal deals.

According to court documents, Daimler AG and its subsidiaries in Germany, Russia, and China agreed to the filing of a single count of conspiracy to violate U.S. anti-bribery laws.

The Justice Department said Daimler, whose stocks trade on multiple exchanges in the U.S., "engaged in a long-standing practice of paying bribes to foreign government officials."

"Daimler and its subsidiaries made hundreds of improper payments worth tens of millions of dollars to foreign officials in at least 22 countries," the government said. Some of the money involved was moved through U.S. banks, prosecutors said.

The list of countries whose officials were bribed, according to the court documents, are China, Croatia, Egypt, Greece, Hungary, Indonesia, Iraq, Ivory Coast, Latvia, Nigeria, Russia, Serbia and Montenegro, Thailand, Turkey, Turkmenistan, Uzbekistan, Vietnam "and others".

The Justice Department said the bribes were made "to assist in securing contracts with government customers for the purchase of Daimler vehicles."