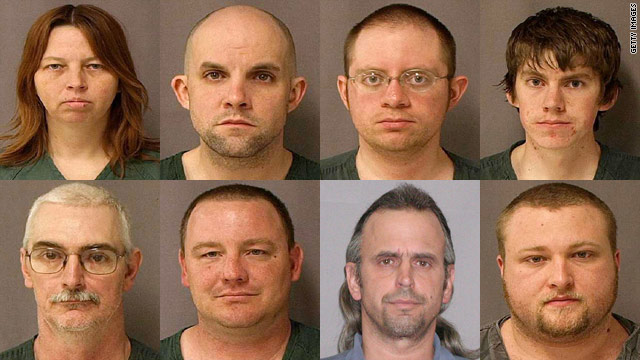 Detroit, Michigan (CNN) -- Federal authorities decided to arrest members of the Hutaree militia group upon learning they were planning an exercise in April that might have included violence, a federal prosecutor said Tuesday.

"They talked about doing a covert reconnaissance exercise," said Barbara McQuade, U.S. attorney for the eastern district of Michigan, in an interview with CNN's Drew Griffin. "And they did also say that, in connection with the exercise, if they came upon anyone from the public or law enforcement who kind of stumbled upon them in the midst of this exercise, they were prepared to kill them."

That moved authorities to act, she said.

The militia members' ultimate plan, she said, was to call 911 reporting a fake emergency and then to kill the police officer who responded. They then planned to kill more police by attacking the funeral procession using improvised explosive devices, she said.

The indictment says those IEDS constitute weapons of mass destruction.

Video: War plans of a militia

McQuade emphasized that the arrests are not an attack on militia groups in general. "In Michigan, we have militia groups that are peaceful, that are exercising their right to bear arms," she said. "We have no problem with those groups."

But the Hutaree members' conduct "really crossed the line," she said. "They advocated that government was their enemy and that federal, state and local police officers were their foot soldiers and they refer to them as 'The Brotherhood' and they needed to attack the brotherhood because it was the brotherhood who was carrying out the orders of the government in the 'New World Order.' "

The nine militia members charged in an indictment represent the core group, she said. Others participated in training but did not engage in criminal activity, she said.

Federal authorities on Monday charged nine Hutaree militia members in connection with the alleged plot. The group says on its Web site that Hutaree means "Christian warrior" and proclaims on its home page, "Preparing for the end time battles to keep the testimony of Jesus Christ alive."

But members of the group are outside the mainstream, a member of another militia group said Tuesday.

"This is a group that I would classify as neither a militia or a Christian group," said Michael Lackomar, a member of the Southeast Michigan Volunteer Militia. "They're more of a private army or a terrorist organization or really just a criminal organization."

Lackomar told CNN's "American Morning" on Tuesday that five Hutaree members sought refuge this past weekend with a Southeast Michigan Volunteer Militia leader because they knew that federal authorities were looking for them. The Southeast Michigan Volunteer Militia member advised the Hutaree members to turn themselves in so no one would get hurt, Lackomar said.

The nine -- six residents of Michigan, two of Ohio and one of Indiana -- were indicted by a federal grand jury here on charges of seditious conspiracy, attempted use of weapons of mass destruction, teaching the use of explosive materials and possessing a firearm during a crime of violence, McQuade and FBI Special Agent in Charge Andrew Arena said.

The five-count indictment unsealed Monday charges that the plot started in August 2008.

A court-appointed counsel was to be assigned to the seven suspects who were in court Monday because none of them had lawyers.

The indictment says Hutaree leader David Brian Stone obtained information about IEDs over the Internet and e-mailed diagrams to a person he believed could manufacture them. He then had one of his sons, Joshua Matthew Stone, and others gather materials necessary to manufacture IEDs, the indictment alleges.

Joshua Matthew Stone is being held without bail by the U.S. Marshals until his arraignment, slated for 1 p.m. Wednesday. He and the eight others are charged with seditious conspiracy, attempted use of weapons of mass destruction, teaching the use of explosive materials and possessing a firearm during a crime of violence.

"Generally, Patriot groups define themselves as opposed to the 'New World Order,' engage in groundless conspiracy theorizing or advocate or adhere to extreme anti-government doctrines," the Law Center said in a report, "Rage on the Right: The Year in Hate and Extremism."