Man says dad's order got him out of accused killer's truck 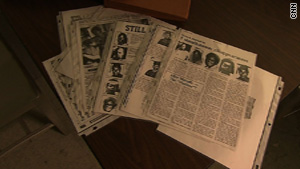 Newark, New Jersey (CNN) -- If he hadn't been an obedient son, and if his father hadn't been looking out for him, police say, another teen probably would have disappeared with his friends in Newark the night of August 20, 1978.

Roderick Royster had joined other teenagers in the back of a pickup truck that evening, but when his father told him to get out, he did.

The five who left in the truck have never been seen again.

It's a mystery that has persisted for 32 years. But this week, police and prosecutors announced the arrests of Lee Anthony Evans, 56, and his cousin, Philander Hampton, 53, who have been charged with five counts of murder, as well as arson. Both have pleaded not guilty.

They are accused of killing Melvin Pittman, 17, Ernest Taylor, 17, Alvin Turner, 16, Randy Johnson, 16, all of Newark, and Michael McDowell, 16, of East Orange.

Royster, who was 16 at the time, said he had already hopped onto Evans' pickup truck when his father ordered him and his brother to go home.

"He says, 'Get off that truck,'" he recalled in a brief phone interview. Royster, whose recollection was that his brother was on the truck with him, said they both obeyed and got out of the truck. (Investigators have referred to Roderick Royster as "number six" in the case, but never have mentioned his brother.)

"I was happy they finally got [Evans]," Royster said. He said he "always knew" who was responsible. "It's been 32 years and it's about time. It's time to get some closure."

Evans' attorney, Michael A. Robbins, says his client is innocent, pointing out that Evans cooperated with police in 1978 and passed a polygraph test.

"In a case such as this, where the evidence has been lost, great care must be taken to prevent outrage, anger and emotion acting as a substitute in court for competent testimony, evidence and proof," Robbins said in a statement.

According to authorities, the defendants led the teens into an abandoned house, killed them and set the building on fire. No trace of them was ever found.

At the time, Newark was full of abandoned buildings. So many caught fire -- 2,600 of them in 1978 -- that firefighters would let the vacant ones burn, said Lt. Louis Carrega, of the Essex County Prosecutor's office.

For 32 years, the case of the "Clinton Avenue Five," as it came to be known, haunted the boys' families and police. None of the teens were likely runaways. None had police records.

A break in the case came about 18 months ago when a witness came to detectives with information that the arson of one abandoned building in 1978 was connected to the case.

Although it took detectives three decades, Royster and relatives of the victims said they never doubted that Evans was responsible.

"We were right, we were right all along, said Michael McDowell's sister, Terry Lawson. "In all these 30 years, we knew it was him."

Back then, Evans, a hulking 25-year-old, was known by another name in the neighborhood. "They called him Big Man," said Jack Eutsey, a former Newark police detective who investigated the case for the Essex County Prosecutor's Office.

"He was big and he was tall. He had a reputation for being dangerous," Eutsey added.

Floria McDonald recalls Evans was "kind of smart and nasty" when she confronted him about her missing son, Alvin Turner.

A neighbor told her she'd seen Alvin get into Evans' truck. McDonald says she confronted him about it the week her son vanished.

"I told him that the children were seen on the back of his truck that night, and he told me he don't give a damn what nobody says," she recalled.

Eutsey, the retired detective, described Evans as a contractor who occasionally hired neighborhood teens for odd jobs. In return, he gave them food, money, and drugs, he said.

Shortly before the boys disappeared, some teenagers broke into Evans' apartment and stole more than a pound of marijuana, investigators said.

"They crossed him," Eutsey said, "and they couldn't get away from that."

Read more about arrests in the "Clinton Avenue Five" case

On the last night they were seen, the boys played basketball and then returned home. A short time later, Evans drove by and picked up them up, one by one. They thought they were going to help him move boxes, police said.

Lawson, who was 11 at the time, recalled Evans was wearing blue jeans, construction boots and a blue T-shirt when he arrived to pick up her brother, Michael.

"When Michael came out, I found it strange that he didn't get in from the passenger side," Lawson recalled. "Evans got out and Michael went in from the driver's side and he sat in the middle seat."

"When they drove off I clearly remember the back of his head and you see Michael and Evans' head right next to him. I watched that truck drive down Main Street. That's the last time I saw him."

Evans blended into the background as memories faded for some.

"For the past 32 years he has led an unremarkable life of hard work and taking care of his family," said Robbins, Evans' lawyer, "and has had no contact with the criminal justice system."

But for the boys' families, the pain remained.

"This devastated my family," said Lawson. "My mother was completely devastated. Every day she would sit in that window and wait for Michael to come home. She would sit there for hours at night and no one could answer the phone because she was expecting a call from Michael."

Michael's mother died of leukemia the year after he disappeared.

Some time during the mid-1980s, Lawson said, she was in the supermarket when her sister pointed out Evans and said, "That's that guy that took Michael."

"I looked at him and I just had chills."