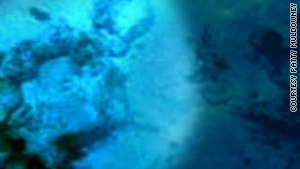 (CNN) -- Aruban authorities have called off a dive team's search for the remains of Natalee Holloway after two days of searching the waters off Aruba proved fruitless, a spokeswoman for the Aruban prosecutor said Wednesday.

The search was initiated after a Pennsylvania couple vacationing on the island told authorities that a picture they took last year while snorkeling looked like a skeleton.

After searching Sunday and Wednesday, police "feel pretty confident" they scoured all areas typically used by snorkelers and found nothing that resembled the image depicted in the photograph, she said. "It's a dead end," she added. "We're assuming the photo is of coral."

Though no more dives are planned to follow up on the couple's tip, Angela said the prosecutor's office will continue "to follow every lead" in an attempt to determine what happened to Holloway, an 18-year-old Alabama high school student who was on a graduation trip in May 2005 when she was last reported seen leaving a bar in the capital of Oranjestad.

Three months after snapping what she said she thought were pictures of "colorful fish," Patti Muldowney and her husband said they realized that one of the pictures depicted what appeared to be human remains.

"When I looked at that photo, I said, 'By darn, that certainly does look like a skeleton,' " John Muldowney told HLN's "Nancy Grace" last week.

The main suspect in the case, Joran van der Sloot, remains free. Van der Sloot has made alleged confession-like statements in TV interviews, one of which involves dumping Holloway's body in the ocean after she suffered a seizure on the beach. Aruban judges have ruled there isn't enough evidence to arrest him.

Holloway's mother, Beth Twitty, has declined to comment on the photo.

The couple, who took the photo to police and the FBI, said it was taken near an old shipwreck.

The FBI said it is investigating.

But Dr. Marty Makary, a physician on the faculty at Johns Hopkins School of Public Health and School of Medicine in Baltimore, Maryland, said he sees mixed signs, some indicating the image may not be a skeleton.

"What I don't like about the photo is, there's no spinal cord or vertebral column," he said. "In fact, below this roundish skull-type profile, you see a curvature which doesn't really represent a normal spinal column."