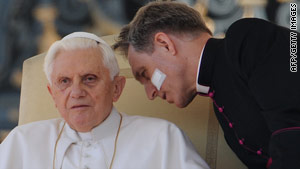 Pope Benedict XVI is expected to release a pastoral letter about the sexual abuse scandal on Saturday.
STORY HIGHLIGHTS

Granite Falls, Minnesota (CNN) -- As a boy in Ireland, Francis Markey dreamed of becoming a priest and serving parishioners all over the world. His dream of ordination came true, but his relationship with parishioners has become the object of international scrutiny.

Now 82 years old, Markey is sitting in an Indiana jail awaiting extradition to Ireland to face the charge that he raped a boy more than 40 years ago.

His story is part of a growing crisis in the Irish Catholic Church, which has recently admitted its leaders hid, moved and even exported suspected pedophile priests abroad to cover up horrific crimes.

Deeply Catholic Ireland has been badly shaken by a government-backed report that found the Archdiocese of Dublin and other church authorities covered up child abuse by priests from 1975 to 2004. Child sexual abuse was widespread then, the report found.

Pope Benedict XVI said Wednesday that he has finished writing an official statement, or pastoral letter, on the child abuse scandal facing the Irish church and he is expected to release the letter on Saturday.

The head of the Irish Catholic Church, Cardinal Sean Brady, said Wednesday that the church's response to abuse had been "hopelessly inadequate."

As a priest, Markey was first suspended in 1964 and sent for psychiatric treatment in Dublin. Throughout the '60s and '70s he was suspended and sent for treatment three times. Eventually, he was sent to New Mexico, where the Catholic church ran a treatment facility for priests with various addictions and sexual problems.

In 1982, Markey resurfaced in the tiny Minnesota town of Granite Falls to fill in for a priest at the small parish of St. Andrew. It was there and then that a boy would come to the priest's home, just across the street from church, and find himself in Markey's arms.

"As I was leaving, he gave me a hug and as he did so he stuck his tongue down my throat," that person, now grown, told CNN. "He had been drinking. ... I can't say if he was drunk but he was definitely drinking."

But Markey's arrest in Indiana, based on the accusation against him in Ireland, has refocused attention not only on the Irish church, but also on the secrets of a small-town Minnesota parish.

"To this day, I wonder how many people ... had encounters with him," said the man who says Markey kissed him as a child.

Markey's attorney did not return calls from CNN.

The Rev. James Moran, the St. Andrew priest who Markey filled in for in the early '80s, said he knew nothing of the allegations against Markey.

But the diocese overseeing St. Andrew told CNN that Markey was sent from the church to treatment because parents were concerned he had an "unnatural attraction to minor males." He never returned to the parish.

Now, decades later, some of Markey's former Granite Falls parishioners may see their old priest again -- in the benches of a courtroom in Ireland, where he is expected to stand trial.