By Jean Casarez, In Session 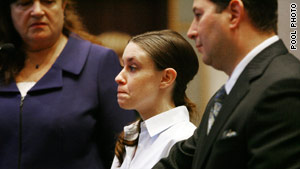 Casey Anthony says she has run out of money for her defense and is seeking the state's assistance.

Full coverage of Casey Anthony's day in court and the latest developments in the case on tonight's "Nancy Grace", HLN 8 p.m. ET"

Orlando, Florida (CNN/In Session) -- Casey Anthony is headed back to court in Orlando, Florida on Thursday -- this time to tell a judge she has run out of money and needs state funding for costs associated with her upcoming murder trial.

Anthony is charged with first-degree murder in the death of her 2-year-old daughter, Caylee, and has pleaded not guilty. Her trial is scheduled to begin on May 9, 2011. The state is seeking the death penalty if she is convicted.

Caylee Anthony's body was found in a lot near her grandparents' home in December 2008. The grandparents, George and Cindy Anthony, have been supportive of Casey Anthony but now are fighting foreclosure, according to a complaint filed by Bank of America.

What is usually a routine application to the clerk to declare Casey Anthony indigent and provide money for her defense may become a contentious issue during Thursday's court hearing.

The Justice Administrative Commission, the state agency that oversees funding, has voiced opposition, saying in court papers it has "severe concerns" about whether Anthony qualifies for financial assistance.

"Miss Anthony has received no income during the time she has been incarcerated," her defense maintains.

Jose Baez, Anthony's lead defense attorney, and Chicago death penalty attorney Andrea Lyon argue in their four-page motion that they are not asking the state to pay their legal fees but to assist with funding for other costs to defend Anthony.

Miss Anthony has received no income during the time she has been incarcerated.
--Defense filing
RELATED TOPICS

As the case headed to trial, the state released thousands of pages of discovery documents. The defense is seeking help with costs that include service of subpoenas, investigative costs, travel, fees charged by experts to interpret forensic evidence, expert witness fees and the cost of depositions.

Baez, Lyon and Linda Kenney Baden are representing Anthony at her trial. According to the defense motion, Lyon will be appearing pro bono -- in other words, free of charge.

The defense attorneys argue in their court papers that Anthony is entitled to financial assistance under the constitution's Sixth Amendment, which protects her right to a fair trial.

Because prosecutors have indicated they are seeking the death penalty, Anthony also is entitled to "the unique standard of care required for a capital defense," the attorneys assert.

Financial affidavits released by the court, in what appears to be Casey Anthony's handwriting, estimates fees paid to Baez at $89,454.83. Lyon's fees are estimated at $22,500. In the affidavits, Casey Anthony says the fees for both attorneys "were or are being paid by myself."

Anthony notes that her income is "zero" and her assets are "zero." She did not list her debts or liabilities.

According to the legal papers, money earmarked to pay Lyon has been used to cover costs, and she has not been paid. "She has been and continues to appear pro bono," the motion states.

The central focus of the commission's response appears to be based on Anthony's own financial affidavit: "Because the defendant has been able to provide over $110,000.00 in her defense, the JAC has severe concerns regarding the defendant's indigence."

Their response cites Florida law, which requires the court to consider "when applicant retained private counsel" and "the amount of any attorney's fees and who is paying the fees."