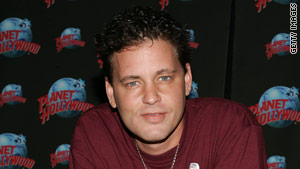 Los Angeles, California (CNN) -- An arrest has been made in the investigation of an illegal prescription drug ring connected to actor Corey Haim, a spokesman for California's attorney general said Wednesday.

Attorney General Jerry Brown is not revealing details of the arrest, his office said, but it comes soon after he revealed that pharmacy records show the actor got thousands of dangerous pills from dozens of doctors in the past year.

The person arrested was not directly connected to Haim but is suspected to be part of the drug ring, Brown spokeswoman Christine Gasparac said.

Brown said last week that Haim's death was linked to an "illegal and massive prescription-drug ring."

Although the actor's family said Haim had reduced his drug use to near zero, Brown said Friday on HLN's "Issues with Jane Velez-Mitchell" that he didn't see "any 'zero' pill consumption."

"If he took all the pills that our records show he was prescribed over the last year and three months, he took very damaging assaults on his body," Brown said.

Haim, 38, had pneumonia, an enlarged heart and water in his lungs when he died March 10, Los Angeles County Deputy Coroner Ed Winter said. But a drug overdose cannot be ruled out until toxicology results are completed, which will probably be in several weeks, Winter said.

State investigators know that Haim obtained "massive amounts" of legal drugs "in what looks to me like a questionable manner because of so many doctors," Brown said.

"How many people go to 10 or 15 or 20 doctors and then run around to 10, 12 and more pharmacies to go fulfill them and sometimes two different doctors in the same day?" Brown asked.

Haim's most recent prescription was filled March 5 for Vicodin, he said.

"In the weeks before that, more Vicodin, more Valium and other things," Brown said.

The 1980s teen movie star died after collapsing at the Los Angeles apartment he shared with his mother.

Despite Brown's statements, Haim's manager insists that it was not a drug overdose but a perhaps drug reaction that took the actor's life.

Just weeks before his death, Haim began seeing an addiction specialist to help completely kick his dependence, manager Mark Heaslip said. Heaslip and Haim's mother suspect that something went wrong with that treatment.

"There was a prescription that was given to him that he had never taken, and he only took one, and I have a funny feeling that he had a reaction to it," Heaslip said.

Haim's mother told the specialist not to give her son the pills, he said, and Haim fell ill with flu-like symptoms soon after he took just one of the pills.

On March 9, hours before his death, Haim stayed with his mother in the apartment they shared on the edge of Burbank, California.

"It was like he had a flu, but he was slurring like an overdose," Heaslip said. "He was very coherent and talked normal."

The loss is harder for family and friends to grasp because it came at a time when Haim had much to live for.

He was helping his mother with her cancer treatments, using income from two recent feature film roles to pay her medical bills, Heaslip said.

Several prescription drug bottles were taken from Haim's apartment, Deputy Coroner Winter said Friday. Although the bottles indicated that the drugs included Vicodin, Valium and Soma, no tests have been done to confirm what they are, he said.

Haim had a prescription for the muscle relaxer Soma and the narcotic pain reliever Norco filled at a pharmacy February 26, a source with knowledge of the transaction said.

Two days after Haim picked up the drugs, his primary care doctor called the San Fernando Valley pharmacy to ask about the prescriptions, the source said. The doctor said "Haim was not feeling well" and he needed to know what drugs had been prescribed, the source said.

Brown said Haim got prescriptions from four or five different doctors in the past three months.

Heaslip said he had talked to Haim in recent months about the dangers of easy access to prescription narcotics.

Haim said he wanted California legislators to pass "Corey's law," which he said should prevent doctors from prescribing more than a three-day supply of addictive drugs at one time, his manager said.

In recent years, the actor was reunited with longtime friend and frequent co-star Corey Feldman in a reality show. "The Two Coreys" ran for two seasons on the A&E Network before it was canceled.

Haim's most famous role was in the 1987 movie "The Lost Boys," in which he also appeared with Feldman. Haim played the role of a fresh-faced teenager whose brother becomes a vampire.