Official: Gun in Pentagon shooting was once in police possession

From Dugald McConnell
CNN's ""The Situation Room with Wolf Blitzer" 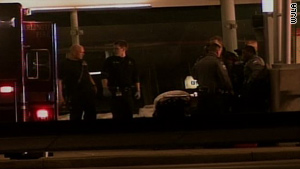 Pentagon police officers shot a man after he shot two of them March 4 outside the Pentagon.
STORY HIGHLIGHTS
RELATED TOPICS

Washington (CNN) -- A gun recovered from this month's shooting at the Pentagon was once in the possession of the Memphis Police Department, a law enforcement official told CNN.

Memphis, Tennessee, police seized the Ruger 9 mm handgun during a traffic stop in 2005 and in 2008 traded it to a distributor in Georgia. It passed through a distributor in Pennsylvania and a dealer in Las Vegas, Nevada, before being sold at a gun show, after which the trail goes cold.

Memphis Mayor A.C. Wharton, a Democrat, said he would review the Police Department's practice of selling or trading guns in police possession, in spite of the revenue it brings.

"I just don't want our city having any role in getting a confiscated gun back on the streets," he told CNN affiliate WREG on Sunday.

Authorities say John Patrick Bedell, 36, of California, armed with two 9 mm handguns, shot and wounded two security guards outside the Pentagon on March 4 before he was fatally shot. Bedell had repeatedly tangled with police and had been institutionalized at least three times for mental problems, according to California authorities.

Some cities destroy weapons that come into their possession. A former New York Police Department official said the city sends as many as 20,000 guns a year to be smelted for scrap metal.

But a bill signed on the same day as the Pentagon shooting bars Tennessee police from destroying contraband guns. It says they must either sell such weapons or use them unless a police official "certifies to the court the weapon is inoperable or unsafe."

Police in Memphis also once possessed the gun used in January shootings at a Las Vegas, Nevada, courthouse, according to the law enforcement official.

As reported first by the Associated Press, the shotgun used in that attack, which killed an officer Stanley Cooper, was confiscated in 1998 in Memphis and handed over to county officials. The Shelby County Sheriff's Office traded it to a gun store in Massachusetts several years ago, and it was shipped to a store in Arizona and eventually sold to someone at a gun show.

Shelby County sheriff's spokesman Steve Shular said trading confiscated guns for upgraded weapons is an efficient way to get adequate equipment for officers protecting the public at a time when law enforcement is asked to make cutbacks in personnel and operating expenses. He added that now, Shelby County trades only used law enforcement weapons, not confiscated weapons.

Wharton said the revenue from trade-ins is not worth it.

"You ask the people in Vegas, and ask those officers at the Pentagon: Was it worth $100,000 for those guns to be used against them?"

Gun rights advocate Larry Pratt of Gun Owners of America said it doesn't matter whether a gun has passed through the hands of a police department if it is sold legally.

"It's no different for a law enforcement agency to sell its guns than it is for a private dealer to sell its guns," Pratt said. "They're both going to be going into the private market."

Memphis police spokeswoman Karen Rudolph said her department would have a hard time controlling what happens to weapons after they are traded.

"It is an unfortunate coincidence, and not within the control of the Memphis Police Department, that the firearms used in both of these high-profile incidents were not properly and legally distributed after being legally obtained by federally licensed law enforcement weapons dealers," Rudolph said.

The suspects in neither the Las Vegas attack nor the Pentagon case were eligible to buy a gun at a store. In the Las Vegas case, suspect Johnny Wicks would have been ineligible because of a prior felony conviction.

Bedell, who had a history of mental illness, failed a background check when he tried to buy a gun in Sacramento, California, his family said. He received a letter from the California attorney general's office in January saying he could not buy a gun because of his history.

Because both guns were sold at gun shows, where records and background checks are not required, authorities are uncertain how either weapon ultimately got into the hands of the suspects.

While some cities are selling guns, cities including Miami, Florida; Boston, Massachusetts; and Oakland, California, have mounted efforts to buy guns from the public. A federal gun buyback initiative, begun under President Clinton, ended under President George W. Bush amid debate over its effectiveness.


CNN's Carol Cratty and Brian Todd contributed to this report.