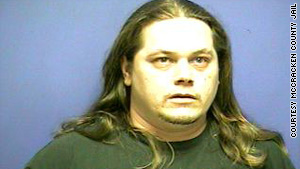 (CNN) -- A Kentucky man high on marijuana and drunk on whiskey put his 5-week-old son in the oven Sunday and left him there overnight, police said.

The oven door was slightly ajar, and the oven was not turned on.

After smoking marijuana at the restaurant where he works as a cook, Larry Long, 33, returned home to share a fifth of whiskey with the baby's mother, Brandy Hatton, McCracken County Sheriff Jon Hayden said in a statement.

Hatton had four or five shots and went to bed while Long finished the bottle, Hayden said.

At 5:30 the next morning, Hatton awoke to the sound of the baby's cries coming from the oven. He had been in it for several hours, police said.

Emergency crews responding to the scene transported the infant to a local hospital, where he was found to be unharmed.

The incident was reported to authorities by a psychiatric facility that Long turned to when he learned what he had done, officials said.

"He actually called a mental health crisis line immediately thereafter and told them that he had done this. And they contacted us," Hayden said.

Police arrested Long and charged him with first degree wanton endangerment. He is being held on bail of $10,000.

Long blamed his actions on the marijuana, which he believes was laced with a hallucinatory agent, officials said.

Authorities have removed the baby from its mother's care and awarded emergency custody to members of her family.