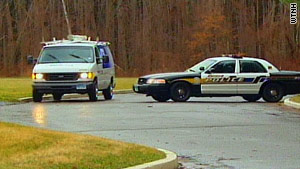 (CNN) -- Local and federal authorities in Enfield, Connecticut, are investigating how a band of burglars broke into a large pharmaceutical warehouse and made off with approximately $75 million in prescription medications.

Police say the well-orchestrated heist at the Eli Lilly and Co. distribution center occurred during a rainstorm shortly after midnight Sunday.

"Based on the sophistication of what was used, this had to be well-executed and planned," Enfield Police Chief Carl Sferrazza said.

According to Sferrazza, the thieves scaled the side of the building onto the roof, where they cut an opening. He said they then rappelled into the building, disabled the alarm and proceeded to steal several dozen pallets of prescription pills, loading them onto one or more getaway vehicles.

Police say the robbery was not discovered until almost 2 p.m. ET Sunday.

When asked whether the crime could have been an inside job, Sferrazza replied, "Anything is possible; we are not ruling anything out at this point."

A spokesman for Eli Lilly, Ed Sagebiel, said the company is working closely with both the Enfield Police and the FBI. Though Sagebiel would not confirm what types of medications were stolen, he said there were no narcotics at the site.

Although the intended destination of the drugs is unknown, the spokesman speculated that the suspects will attempt to sell them on the domestic or international black markets.

"We certainly know that there is a market for these products," Sagebiel said. "We have a closed system here in the U.S. that makes it more difficult to distribute them in the United States for legitimate means."

Based in Indianapolis, Indiana, Eli Lilly is the ninth-largest pharmaceutical company in the world.