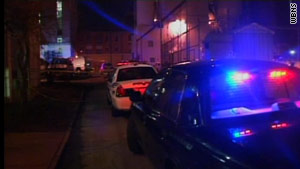 The shooting occurred early Tuesday at a maintenance building on the Ohio State University campus in Columbus.
STORY HIGHLIGHTS

(CNN) -- A man apparently angry over a poor performance evaluation entered an Ohio State University maintenance building early Tuesday and opened fire, killing a manager before turning the gun on himself, police said.

Authorities found suspect Nathaniel Brown, 51, a custodial worker, suffering from a self-inflicted gunshot at the scene, Denton said. He was transported to the Ohio State University Medical Center, where he was dead on arrival.

Police believe Brown -- a probational employee since October who had received a poor performance review -- entered the building dressed in dark clothing carrying two handguns and began firing into an office suite, Denton said. Officials would not say when Brown received the review, who gave it to him or provide further details, citing the ongoing investigation.

A third person, Henry Butler, 60, an operations shift leader, also was shot. He was in stable condition at the OSU Medical Center, Denton said.

Police earlier Tuesday had said that two people were wounded and one killed and that the alleged shooter was in custody.

About a half-dozen employees were at the building when the shooting occurred, and some witnessed it, authorities said.

Ohio State's Web site said the building where the shooting occurred was secured, and some traffic restrictions remained in place Tuesday morning. "The university continues normal operations," the school said. "Classes will be held and normal work schedules are in effect."

E-mail alerts were sent to students warning them about the shooting, the university said.

The student newspaper, The Lantern, published an article Sunday saying that students were questioning the effectiveness of such e-mail alerts after three serious crimes last week.

A university committee was scheduled to meet this week to determine if changes needed to be made to the notification system, The Lantern reported.