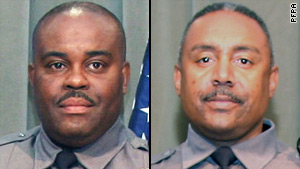 Officers Marvin Carraway, left, and Jeffrey Amos were treated for their wounds at a hospital and released.

Arlington, Virginia (CNN) -- The man who authorities say shot and wounded two police officers outside the Pentagon Thursday before he was fatally shot had a history of mental health problems and a penchant for spouting anti-government conspiracy theories.

John Patrick Bedell repeatedly tangled with police in recent months, while his relationship with his parents -- whom he lived with in a gated community in Northern California -- grew increasingly contentious.

"There's a history of mental health problems with him that the family's been dealing with for a number of years," San Benito County, California, Sheriff Curtis Hill said Friday.

Bedell, 36, suffered from bipolar disorder, according to court records from a 2006 California arrest for a man by the same name. That man's birth date matches the one authorities gave for the Pentagon shooter.

Bedell had been committed to mental institutions at least three or four times, according to Hill.

His ties to family had grown strained since late last year. Two months ago, Bedell's parents filed a missing person report about him, although he returned and the report was canceled two weeks later, Hill said.

Bedell's mother had also come across "some information -- either from an e-mail received from a company, or an online posting on a bank account or something -- where on the 10th of January he had made a $600 purchase at a shooting range in the Sacramento area in California," Hill said. Bedell would not tell her what he bought, he said.

On Friday the FBI said they believe that Bedell drove to Washington, D.C., and parked his car in a garage near the Pentagon.

Video: Who is John Patrick Bedell?

Bedell "was very well dressed in a suit" and showed "no distress in his appearance" as he approached a screening area to enter Pentagon grounds about 6:40 p.m. Thursday evening, Pentagon Police Chief Richard S. Keevill said.

"He walked very directly to the officers and engaged," Keevill said. "He was very well armed. I will tell you that he had two 9 mm semiautomatic weapons and many magazines."

On Friday, a picture emerged of Bedell as a troubled man with an intense interest in science.

On the social networking Web site LinkedIn, a profile page for a J. Patrick Bedell in the San Francisco Bay Area -- where Bedell's family lives -- described him as an "MSEE student," short for Master of Science in Electrical Engineering.

The page said he graduated from the University of California Santa Cruz with a bachelor's degree in physics in 1994.

The LinkedIn page said that Bedell attended San Jose State University from 1995 to 1996, but that he did not get a degree there.

In the missing person report filed in January, Bedell's father said he worked in the San Jose area but that he did not know where.

"The highway patrolman wanted to know a little more information about him because when he stopped him for speeding, when he came up to the car, the interior of the vehicle was in 'disarray,'" Hill said. The patrolman spoke with Bedell's mother, then gave him a warning and sent him on his way, Hill said. The sheriff said the stop prompted the family to file the missing person report, Hill said.

In filing the report, Bedell's father said John had been staying at an unknown address in San Jose after getting into a fight with his brother three weeks earlier.

It wasn't Bedell's first blowout with his brother. In July 2006, Bedell got into an altercation with Matthew Bedell and signed a citizen's arrest to have him taken to jail and booked, Hill said.

A week after Bedell's father filed the missing report in January, the parents called the police to say their son had shown up. Authorities went to the family's home, where the parents said Bedell "appeared to be impaired, delusional, and agitated," according to Hill.

"The agitation ... was due to his mother asking him questions [such as], 'Where have you been? What have you been doing?'" Hill said. She also asked him about the $600 purchase at the shooting range, he said.

"When she asked him to give her some details about what that purchase was, that's when he became agitated and left the residence," Hill said.

Authorities arrived after he had left, and although they gave out information on him to law enforcement agencies, they were not able to find him, Hill said. The family told authorities that he had a "history of mental illness."

On January 18, Bedell's father told authorities his son had returned home and that the missing person report should be canceled, Hill said. According to the police report, Bedell was staying at an unknown address after stopping at home.

A couple weeks later, on February 1, Bedell was picked up by police in Reno, Nevada, and charged with marijuana possession. His court date was Tuesday, but Bedell failed to show up.

Court records from California show that investigators arrested a John Patrick Bedell in June 2006 on charges of cultivating marijuana and resisting arrest.

Bedell pleaded guilty. "I sincerely request the court not find the offense to reflect a propensity for violence on my part," he said in a signed statement in the case. "I was experiencing an episode of mental illness (bipolar disorder) during the event in question."

Court documents from the 2006 case also include a statement from Bedell's psychiatrist confirming Bedell suffered from bipolar disorder and describing him as "relatively symptom-free when under medication."

In an Internet posting, JPatrickBedell referred to being arrested in 2006 on marijuana charges.

"Given my belief that cannabis prohibition is the least defensible and most unjust aspect of the prohibitionist regime existing throughout the world today, I decided in March 2006 to cultivate cannabis in full view of the world," the person said in a 2006 podcast.

Bedell appears to have been the same man who had railed against the government repeatedly on the Internet. Through podcasts and a Wikipedia page, a man identified online as JPatrickBedell cast the government as a criminal force destroying personal liberties.

Such an organization, the man said, "would use its powers to convert military, intelligence, and law enforcement bureacracies (sic) into instruments for political control and the domination and subjection of society, while discrediting, destroying, and murdering honest individuals within those services that work to root out corruption and faithfully serve their fellow citizens."

In a video posted on YouTube in October 2006, a man identified as jpbedell talked about his idea for "information currency," which he said would "create a financial market for information." The man in the video is the same man shown in a photograph of the shooter released Friday by the FBI. The man's voice in the YouTube video also sounds similar to the voice in the podcasts.

A person using the screen name JPatrickBedell wrote about the same idea on a Wikipedia page that was taken down early Friday.

The San Benito County sheriff read a statement from the family on Friday, saying that they were "devastated" by Thursday's news.

"To the outside world, this tragedy is the first and only thing they will know of Patrick; to us he was a beloved son, brother, grandson, nephew and cousin," the family said, according to Hill. "We may never know why he made this terrible decision. One thing is certain, though, his actions were caused by an illness and not a defective character."

They expressed hope for a quick recovery of the two wounded officers, and asked that the family's privacy be respected.

"This is a well-respected longtime local family," Hill told CNN on Friday. "They're a middle -- upper-middle class folks who are well known in the community. They're a good solid family."

Hill said that Bedell's father is a financial advisor and that his mother works at the local branch of the California-based Gavilan College.

At a news conference Friday morning, Keevill, the Pentagon police chief, said Pentagon and Metro cameras of the area show the gunman in the time leading up to the shooting.

The two wounded officers had superficial injuries and were released from a hospital, officials said.

When officers located Bedell's vehicle at a nearby parking garage, they found more ammunition inside, Keevill said.

Authorities do not know what the man's motive may have been, he said.

Several versions of a 2004 scientific proposal to the Department of Defense, attributed to J. Patrick Bedell, exist in multiple locations on the Internet. A 28-page version of the proposal, "Aluminum Anodization for DNA Integrated Circuits," lists Bedell as the sole employee for the project and estimates he would work 1,000 hours at $30 an hour for a total of $30,000.

The proposal was a response to an April 2004 call from the Defense Advanced Research Projects Agency (DARPA), which provides research grants for projects related to defense. It was not clear if Bedell ever submitted the proposal.

A DARPA spokesperson would not confirm whether the proposal was received, saying the agency could legally comment only on proposals it funded.

"Investigators are searching the car, conducting interviews and reviewing a video of the shooting in an effort to piece together a timeline of Bedell's activities leading up the incident," the FBI said in a news release.

CNN's Dan Simon and Barbara Starr contributed to this report.