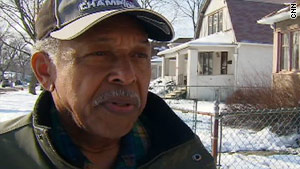 Washington (CNN) -- Chicago's 28-year-old strict ban on handgun ownership appeared in trouble Tuesday at the U.S. Supreme Court in a potentially far-reaching case over the ability of state and local governments to enforce limits on weapons.

A conservative majority seemed ready to say the U.S. Constitution gives individuals greater power than states -- or at least equal power -- as far as possessing certain firearms for self-protection.

The only question was how far the court would apply competing parts of the 14th Amendment to preserve some "reasonable" gun control measures in place nationwide.

"There are provisions of the Constitution, of the Bill of Rights, that have been incorporated against the states, where the states have substantial latitude and ample authority to impose reasonable regulations," Justice Anthony Kennedy said. "Why can't we do the same thing with firearms?"

At issue is whether the constitutional "right of the people to keep and bear arms" applies to local gun control ordinances, or only to federal restrictions. The basic question has remained unanswered for decades, and it gives the conservative majority on the high court another chance to allow Americans expanded weapon ownership rights.

A ruling is expected by late June.

The appeal was filed by a Chicago, Illinois, community activist who sought a handgun for protection from gangs. Speaking from outside his South Side home, Otis McDonald told CNN that he wants a handgun to protect himself and his family from violence in his neighborhood.

"That's all I want ... just a fighting chance," McDonald said. "Give me the opportunity to at least make somebody think about something before they come in my house on me."

The city of Chicago, with perhaps the toughest private weapons restrictions in the nation, denied McDonald's application for a handgun permit.

Two years ago the justices affirmed an individual's right to possess such weapons, tossing out restrictive laws in the federal enclave of Washington, D.C.

The larger issue is one that has polarized judges, politicians and the public for decades: Do the Second Amendment's 27 words bestow gun ownership as an individual right or as a collective one -- aimed at the civic responsibilities of state militias and therefore subject, perhaps, to strict government regulation? And is that regulation limited to federal laws, or can they be applied to local communities?

The amendment states: "A well-regulated militia being necessary to the security of a free state, the right of the people to keep and bear arms, shall not be infringed."

Tuesday's hourlong arguments focused mainly on the whether the Second Amendment should be "incorporated" or applied to state and local laws like most of the other amendments in the Bill of Rights.

James Feldman, the attorney for the city of Chicago, told the justices that gun laws are different. "Firearms are designed to injure and kill," Feldman said.

That argument brought skepticism from several conservatives on the bench.

"Your position is that a state or local government could completely ban all firearms?" Justice Samuel Alito asked Feldman.

Justice Antonin Scalia said the court's 2008 ruling over Washington's law applied this time, too. "The function of what was codified" in the Second Amendment, he said, "was to enforce the traditional right of the people to bear arms."

Chief Justice John Roberts downplayed concern of a sweeping ruling that might cripple cities from finding ways to prevent violence. The extent of gun rights are "still going to be subject to the political process," Roberts said.

A number of others, led by Justice Stephen Breyer, sought to limit the court's ruling striking the handgun ban in Washington. That decision offered at least partial constitutional validation to citizens seeking the right to possess one of the most common types of firearms in their homes.

The Justice Department estimates as many as 275 million guns are in the United States. In 2005, three-quarters of the 10,100 homicides by firearms nationwide were committed with handguns.

Underpinning the legal basis for the court's jurisdiction in this appeal is a complex reading of the 14th Amendment, passed in the wake of the Civil War to ensure all citizens -- including newly freed slaves -- were protected from state laws that might restrict their fundamental rights.

One part ensures states cannot deprive people of "life, liberty, or property, without due process of law." That has been commonly applied by federal courts when it comes to disputes over basic rights, so-called "ordered liberty" cases. Such cases include affirming the right to abortion and to homosexual sex.

But another rarely used provision also prevents states from depriving the "privileges or immunities" of all citizens. The specific question for the high court in the Chicago case is whether the "immunities and privileges" clause should now be used to overturn the handgun ban. An 1873 ruling limited use of that provision when striking down a variety of state laws.

Alan Gura, the attorney for Chicago activist McDonald, has promoted a new reading of the clause in his lead role representing gun owners.

However, the current court appeared reluctant to revive that argument, seemingly content to apply the "due process" standard to Chicago's handgun law. The National Rifle Association supports that position.

The constitutional theories are dense, but some legal scholars have said they think if the high court embraces this "privileges and immunities" clause, it could open up to fresh review a huge range of issues, such as property rights and same-sex marriage.

Courts have generally upheld other cities' restrictions on semiautomatic weapons and sawed-off shotguns. The high court's conservative majority has in recent years upheld a California ban on assault rifles, similar to a federal ban that expired in 2004.

Some constitutional experts have noted the Bill of Rights had traditionally been applied by courts only to the federal government, not to local entities. It was not until the past half-century that the justices have viewed free speech, assembly and the press -- among other rights -- as individual in nature, and fundamental to liberty, superseding in many cases the power of states.

There have been limits. The high court repeatedly has refused to extend to states the Fifth Amendment requirement that persons can be charged with serious crimes only by "indictment of a grand jury."