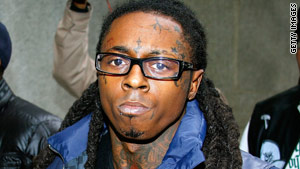 Lil Wayne, whose real name is Dwayne Carter, is expected to get a 1-year sentence.
STORY HIGHLIGHTS
RELATED TOPICS

New York (CNN) -- Rapper Lil Wayne will go directly to jail after he is sentenced by a Manhattan judge Tuesday afternoon for a gun conviction, according to a person familiar with the case.

Dwayne Carter, as he is known legally, pleaded guilty to felony gun charges in a deal with prosecutors October 2009. He is expected to get a one-year prison sentence.

His sentencing was delayed three weeks so he could get some dental work done, including removal of his diamond-studded braces.

The person familiar with the case would not confirm where Wayne would serve his sentence.

The plea agreement was a result of the rapper's 2007 arrest outside New York's Beacon Theater.

According to police, Wayne had a .40-caliber pistol on his tour bus.

"It's not his gun, they know whose gun it is," Wayne's attorney, Stacey Richman, said after a hearing last month.

In an unrelated case, Wayne also faces felony drug possession and weapons charges in the state of Arizona.

Lil Wayne is a multiplatinum-selling and Grammy-winning rap artist. His hits include "The Block is Hot" and "Lollipop," and his album "Tha Carter III" was the top-selling disc of 2008. His latest album, "Rebirth," was released last month.