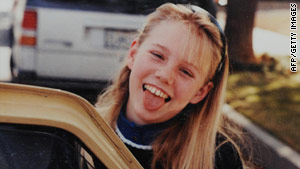 Jaycee Dugard was 11 when she was abducted near her home in South Lake Tahoe, California.

(CNN) -- A California sex offender suspected of abducting a girl in 1991 and keeping her captive for 18 years is suffering from "serious mental illness," defense attorneys say in court papers.

"It appears that Phillip Garrido has been hearing [the] voices of angels for years," said documents filed Wednesday in El Dorado County Superior Court.

The court papers dispute prosecutors' asserting that Garrido is a "master manipulator" who is still trying to influence his victim.

Garrido, 58, and his wife, Nancy, are charged with 29 felony counts in the kidnapping of Jaycee Dugard, who was 11 when she was snatched from the street in front of her house in South Lake Tahoe, California.

She was 29 when found in August at the Garridos' home in Antioch, about 120 miles from her home. Prosecutors allege that Garrido fathered two daughters with Dugard during her captivity.

Both Phillip Garrido, who was a registered sex offender on parole at the time of his arrest in August, and Nancy Garrido have pleaded not guilty to the charges against them.

In a filing earlier this month, prosecutors called Garrido a "master manipulator," citing journal entries made by Dugard. They also said Garrido's attorneys were attempting to contact Dugard, whose location they are trying to keep secret, and asked the court to impose a protective order barring such contact. A judge refused to immediately grant the request, setting a hearing for Friday.

Garrido's public defenders, Rick Meyer and Susan Gellman, said Dugard, who is identified in court papers as Jane Doe, told investigators following Garrido's arrest that he had a "self-described ability to understand the voices of angels. ... One of the children disclosed this as well, describing how the voices would keep him up at night, and how the angels lived underground and spoke to him from this location."

The filing points to Garrido's "manifesto," entitled "Origin of Schizophrenia Revealed," which he prepared in the days and weeks before his arrest and addressed to the FBI. He took it "from law enforcement agency to law enforcement agency, calling attention to himself in a way that could [and ultimately did] lead to his arrest," the attorneys said.

Garrido went to the campus of the University of California, Berkeley, accompanied by his two daughters with Dugard, to get a permit to stage a demonstration of his ability, the documents said. University employees brought about his arrest after contacting his parole officer, saying they thought Garrido's behavior was odd.

"Mr. Garrido's illness was not subtle at all," the documents said. "Obviously the campus police at the University of California, Berkeley were able to perceive the clear signs of mental illness and took some action instead of ignoring them."

Prosecutors, the defense said, have discussed the "cover stories" told by Dugard and the children when Garrido was summoned to the parole office the following day and questioned. Authorities maintain such lies were evidence of Garrido's manipulation, according to the documents.

"In reality, it appears that everyone was very frightened by what could happen. They were afraid they would be separated and lose each other," the defense said. "Even the children made up stories; there was a sense of panic. They were trying to protect each other. One of the children was so nervous she got sick."

Asked several times who was the father of the children, Garrido told several different stories, his attorneys said. "The agent's report is helpful in showing how manipulative Mr. Garrido is not."

Further evidence of Garrido's mental illness is his repeated contact with the news media, according to his attorneys. "Contacting the media against the advice of counsel when one is facing criminal charges as serious as these shows an inability to cooperate with counsel and an inability to appreciate the function of the criminal justice system," the attorneys said. "In short, Mr. Garrido's contacts with the media, when his attorney tells him not to have them, are not manipulations at all, but evidence that he may not be competent to be a defendant."

Garrido believes that Dugard is part of his "transformation" and his "disclosure," the documents said. "Mr. Garrido believes that he and Jane Doe once had a plan to launch a Web site wherein Mr. Garrido's ability to speak to angels would be revealed to mankind. He remains confused as to why that has not happened."

The attorneys said they had not attempted to contact Dugard, but sent a letter to her former attorney without knowing he was no longer representing her.

Prosecutors said a sentence in that letter, conveying that Garrido harbored no ill will toward Dugard or the children and "loves them very much," was interpreted as a manipulation attempt. Defense attorneys maintained it was not. "There has been no intimidation or harassment of any kind," they wrote.

Authorities maintain Dugard does not want to speak to Garrido or his attorneys. She has that right, the defense attorneys said, and the court can refuse to disclose her location.

"However, in a case like this, it would make settlement far more difficult if counsel were forever foreclosed from approaching the idea of contact again," the attorneys said. If the court will not disclose Dugard's location, they requested a representative be appointed for communication purposes.