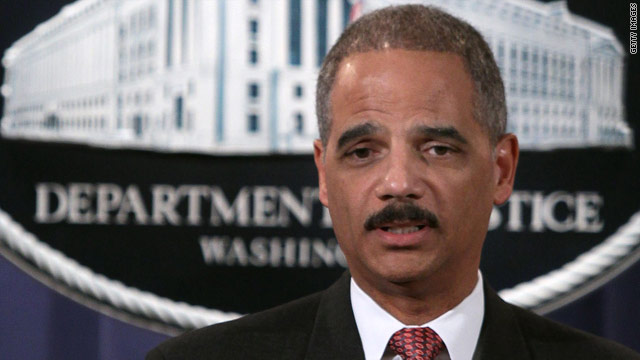 Attorney General Eric Holder on accused terrorists: "We need not make more of these people than they are."
STORY HIGHLIGHTS

Washington (CNN) -- Attorney General Eric Holder on Monday did not rule out the possibility that accused 9/11 mastermind Khalid Sheikh Mohammed and four accused accomplices would be tried in New York.

"We are in the process of trying to determine where the case will be tried," he told reporters after announcing that Najibullah Zazi had pleaded guilty Monday to conspiring with others to detonate explosives in the United States.

Asked whether New York City was still on the table, he said, "We are in the process of speaking with local officials trying to determine where that trial will occur."

Last month, White House officials said no decision had been made on whether to change the plan to hold the September 11 terrorist attack trial in a civilian court in lower Manhattan.

Asked whether he would consider moving the trial to a community where political leaders do not want it, he said, "We will have to take into account what political leaders, what residents, what their views are."

But he urged Americans not to blow out of proportion the terrorism trial. "People should keep in mind that we are talking about doing things that we have done safely over the years," he said. "We need not make more of these people than they are."

He called the defendants "thugs" who have engaged in criminal and warlike activities against the United States, "but they are not people who are different from those we have shown an ability to handle in the past."

Still, he added, "We will take into account the desires, the wishes, of the people at locations where the trial might be held, including in Manhattan."

This month, several senators announced legislation that would cut off funding for the federal trial of Mohammed and the four accused accomplices, saying the five should be tried in a military court.

Last month, New York Mayor Michael Bloomberg and other politicians expressed concern over the costs and disruption of holding the trial of Khalid Sheikh Mohammed and four accomplices in New York City.

David Axelrod, the senior adviser to President Obama, and White House Press Secretary Robert Gibbs have said that Obama believes the trial should take place in a criminal court instead of before a military commission, as occurs for some terrorism suspects.

However, Axelrod and Gibbs have acknowledged that Obama and the Justice Department were considering moving the trial from New York City.

Gibbs and Axelrod have criticized Republican opposition to try the men in a criminal court, saying no one complained when the previous administration of Republican President George W. Bush tried terrorism suspects such as "shoe bomber" Richard Reid in U.S. criminal courts.

Senate Minority Leader Mitch McConnell, R-Kentucky, told CNN last month that the Bush administration was wrong to try terrorist suspects on U.S. soil. Instead, trials for such suspects should be held by military commissions at the Guantanamo Bay, Cuba, detention facility where they are held, McConnell said.

Obama intends to close the Guantanamo facility by transferring the roughly 200 suspects to the United States to stand trial or face indefinite detention, or to third countries.

New York police have estimated that the cost to the city would exceed $200 million per year in what could be a multiyear trial and that they would need to install more than 2,000 checkpoints in lower Manhattan.

During Monday's news conference, Holder used Zazi's plea to defend the U.S. criminal justice system, which has been under fire after a Nigerian man allegedly tried to detonate a device aboard a U.S.-bound flight from the Netherlands on Christmas Day.

The man, Umar Farouk AbdulMutallab, is being tried in civilian court. Republican leaders have argued that AbdulMutallab should be treated as an enemy combatant and tried in a military tribunal.

"We are at war against a very dangerous and intelligent and adaptable enemy, and we must use every weapon available to us in order to win that war," Holder said.

In the Zazi case, he said, "the criminal justice system has proved to be an invaluable weapon for discovering plots and incapacitating terrorists. ... We'll continue to use it to protect the American people from terrorism."