Haiti missionary: We had 'good intentions' 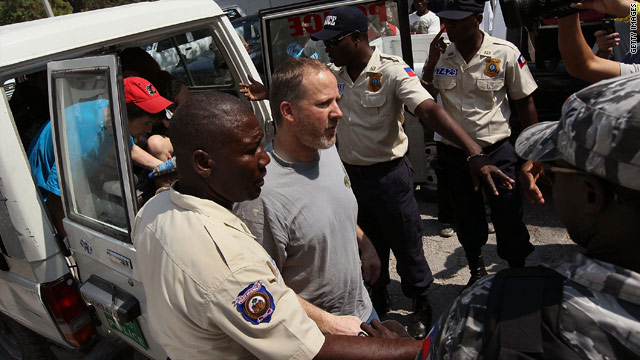 Tonight, a CNN exclusive "AC360°" interview. Hear from Jim Allen, one of the missionaries detained in Haiti and later released. Watch "AC360°," tonight at 10 ET.

That was the message Friday from Jim Allen, one of the 10 American missionaries arrested January 29 in Haiti on child kidnapping charges. Allen, along with seven others, was released this week without needing to post bail.

Two members of the group -- including the group's leader, Laura Silsby -- have remained in Haitian custody to answer questions about why they traveled to the country on an earlier trip.

Silsby and Charisa Coulter were back in a Haitian courtroom Friday. Silsby said she hoped the legal process would be completed by the end of the day.

Allen said he went to Haiti because he "knew that I had some skills that I could use." In an appearance on "Oprah," he said he has experience in the construction industry.

Allen said he's not angry with Haitian authorities. "They were going through the legal process [and] ... I think they needed to," he said.

The 10 missionaries were charged with kidnapping and criminal association for trying to take 33 children out of Haiti after the magnitude-7.0 earthquake that devastated the impoverished country January 12.

Allen said the group had been approached by a man at an orphanage who claimed to have a group of children with no parents or access to care. The man asked if "we could please help," he said.

Allen claimed that the group intended to bring the children to a temporary orphanage set up at a hotel in the Dominican Republic. When his group returned to the United States, Allen said, another group of volunteers would have taken responsibility for providing care to the children.

His arrest by Haitian authorities, he said, was "quite a shock," but he always remained confident that "as soon as [our] story was told ... we'd be coming home."

Being in jail was hard, he added, but the Haitian police "treated us as well as they could with what they had."

The missionaries slept on a concrete floor while in jail but "had a roof over our head" and a hot meal once a day, he said. When it rained, water would drip into his cell, but outside, "millions" of people in the street "were getting poured on," he said.

A large number of Haitians "had it worse than I had it," he said.

Allen said he had no indication that there is any truth to the charge that Silsby was hoping to profit from the mission by looking for children she could later place with families for large fees.

The missionaries were "legitimately interested" in helping the children, he claimed. They had "good intentions."

Allen dismissed as "a complete fabrication" reports that eight members of the group signed a note saying they had been misled by Silsby.

He said he has "no ill feelings toward anybody"

Phyllis Allison, Allen's mother, recently said that her son's captivity in Haiti had "been awful, but we just trusted in God" that he would return home.

Allen, along with the seven other released missionaries, arrived at Miami International Airport late Wednesday night on a U.S. Air Force C-130 cargo plane from the Haitian capital, Port-au-Prince.

Lawyer Gary Lissade, who represents Allen, has said the fact that the judge released the Americans on their own recognizance may indicate that the charges will be eventually dropped.

Allen, who lives in Amarillo, Texas, told Oprah Winfrey he had a very "good night of sleep last night."