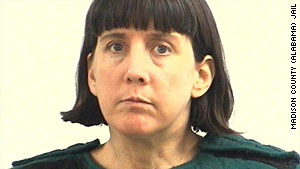 The attorney for accused shooter Amy Bishop, pictured, says he "went overboard" when he called his client a "wacko."
STORY HIGHLIGHTS

(CNN) -- The defense attorney appointed to represent an Alabama professor accused of shooting her colleagues said Friday he regrets describing her as "wacko."

But at a news conference, Roy Miller said "something's wrong with this lady."

He also said his client, Amy Bishop, is "aware of what she's done and she's very sorry for it."

Bishop is under suicide watch in jail, Miller said.

In an interview Thursday with CNN affiliate WHNT after visiting Bishop, Miller said, "I just think the case speaks for itself." He added, "I think she's wacko."

At Friday's news conference, he referred to that remark.

"Good lord, y'all," Miller said. "Listen, I went overboard with that. When I talk to y'all I make statements ... I wish I hadn't have made. And probably that's one of them."

He added that he was trying to imply that the facts of the case "speak for themselves."

Bishop told him she does not remember the incident, Miller said.

But now, "she knows she's killed some folks, I'm sure."

The biology professor is charged with capital murder and three counts of attempted murder in the shootings at the University of Alabama in Huntsville last week.

At the end of a biology department faculty meeting at the University of Alabama in Huntsville, Bishop suddenly "just stood up and shot," a professor who survived the incident told CNN affiliate WAAY.

Three of Bishop's colleagues were killed; three others were wounded.

Bishop, a Harvard-trained geneticist, had recently been denied tenure.

Bishop, a professor and researcher at the university, was arrested as she was leaving the building. A 9 mm handgun was found inside, on the second floor.

Miller said his client is "trying to keep from cracking up down there emotionally," and is worried that if she breaks down, officials in the jail might think she's going to commit suicide.

Discussing his client's mind, he said that doctors of biology "have got, in my estimation, high IQs -- and the high IQ in my opinion is sometimes not good for people." He said Bishop sometimes is "so focused on the mental basis" that she "does not know what's going on around her."

He said he believes the case will boil down to Bishop's mental state at the time of the killings.

In the wake of the shootings, information came to light about previous run-ins with the law Bishop had. She faced criminal charges after an altercation at a Massachusetts restaurant nearly eight years ago, police said. The police report says Bishop became furious that there was no booster seat available for her child, began screaming at the woman who had taken the last one and struck her in the head.

Authorities previously have said Bishop, who is also known as Amy Bishop Anderson, fatally shot her brother in the family's Braintree, Massachusetts, home in 1986.

The shooting was ruled accidental, but after a review of the incident after the Alabama shootings, Norfolk County District Attorney William Keating issued a statement saying that probable cause had existed in 1986 to charge Bishop with assault with a dangerous weapon, carrying a dangerous weapon and unlawful possession of ammunition.

However, the statute of limitations on those charges has expired, as well as on a potential charge of "wanton and reckless conduct" -- the lowest standard for manslaughter in Massachusetts, Keating said.

In addition, the Boston Globe reported Monday that Bishop and her husband, Jim Anderson, were questioned in the 1993 attempted mail bombing of a Harvard Medical School professor.

Jim Anderson said on Monday that federal investigators had gathered "a dozen subjects" in the attempted bombing, but "there were never any suspects. Never anyone charged, never anyone arrested. Then five years later, we got a letter from the ATF saying, 'You are in the clear.' "