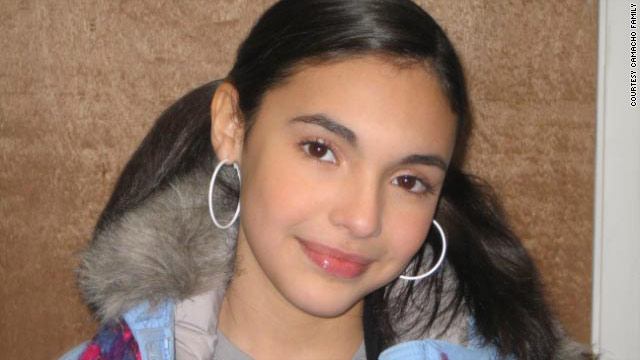 "They put the handcuffs on me, and I couldn't believe it," Alexa Gonzalez, 12, said of her arrest.
STORY HIGHLIGHTS

(CNN) -- There was no profanity, no hate. Just the words, "I love my friends Abby and Faith. Lex was here 2/1/10 :)" scrawled on the classroom desk with a green marker.

Alexa Gonzalez, an outgoing 12-year-old who likes to dance and draw, expected a lecture or maybe detention for her doodles earlier this month. Instead, the principal of the Junior High School in Forest Hills, New York, called police, and the seventh-grader was taken across the street to the police precinct.

Alexa's hands were cuffed behind her back, and tears gushed as she was escorted from school in front of teachers and -- the worst audience of all for a preadolescent girl -- her classmates.

"They put the handcuffs on me, and I couldn't believe it," Alexa recalled. "I didn't want them to see me being handcuffed, thinking I'm a bad person."

Alexa is no longer facing suspension, according a spokeswoman for the New York City Department of Education. Still, the case of the doodling preteen is raising concerns about the use of zero tolerance policies in schools.

I didn't want them to see me being handcuffed, thinking I'm a bad person.
--Alexa Gonzalez

Critics say schools and police have gone too far, overreacting and using well-intended rules for incidents involving nonviolent offenses such as drawing on desks, writing on other school property or talking back to teachers.

"We are arresting them at younger and younger ages [in cases] that used to be covered with a trip to the principal's office, not sending children to jail," said Emma Jordan-Simpson, executive director of the Children's Defense Fund, a national children's advocacy group.

There aren't any national studies documenting how often minors become involved with police for nonviolent crimes in schools. Tracking the incidents depends on how individual schools keep records. Much of the information remains private, since it involves juveniles.

But one thing is sure: Alexa's case isn't the first in the New York area. One of the first cases to gain national notoriety was that of Chelsea Fraser. In 2007, the 13-year-old wrote "Okay" on her desk, and police handcuffed and arrested her. She was one of several students arrested in the class that day; the others were accused of plastering the walls with stickers.

At schools across the country, police are being asked to step in. In November, a food fight at a middle school in Chicago, Illinois, resulted in the arrests of 25 children, some as young as 11, according to the Chicago Police Department.

The Strategy Center, a California-based civil rights group that tracks zero tolerance policies, found that at least 12,000 tickets were issued to tardy or truant students by Los Angeles Police Department and school security officers in 2008. The tickets tarnished students' records and brought them into the juvenile court system, with fines of up to $250 for repeat offenders.

The Strategy Center opposes the system. "The theory is that if we fine them, then they won't be late again," said Manuel Criollo, lead organizer of the "No to Pre-Prison" campaign at The Strategy Center. "But they just end up not going to school at all."

His group is trying to stop the LAPD and the school district from issuing the tickets. The Los Angeles School District says the policy is designed to reduce absenteeism.

And another California school -- Highland High School in Palmdale -- found that issuing tardiness tickets drastically cut the number of pupils being late for class and helped tone down disruptive behavior. The fifth ticket issued landed a student in juvenile traffic court.

In 1998, New York City took its zero tolerance policies to the next level, placing school security officers under the New York City Police Department. Today, there are nearly 5,000 employees in the NYPD School Safety Division. Most are not police officers, but that number exceeds the total police force in Washington, D.C.

In contrast, there are only about 3,000 counselors in New York City's public school system. Critics of zero tolerance policies say more attention should be paid to social work, counseling and therapy.

"Instead of a graduated discipline approach, we see ... expulsions at the drop of a hat," said Donna Lieberman, an attorney with the New York branch of the American Civil Liberties Union.

We see ... expulsions at the drop of a hat.
--Donna Lieberman, ACLU attorney

"If they have been suspended once, their likelihood of being pushed out of the school increases," she said. "They may end up in jail at some point in their life."

One of Lieberman's clients was in sixth grade when police arrested her in 2007 for doodling with her friend in class. The child, called M.M. in court filings to protect her identity, tried to get tissues to remove the marks, a complaint states.

Lieberman says police subjected M.M. to unlawful search and seizure. A class-action lawsuit, filed in January on behalf of five juveniles, is pending. It maintains that inadequately trained and poorly supervised police personnel are aggressive toward students when no criminal activity is taking place.

Several studies have confirmed that the time an expelled child spends away from school increases the chance that child will drop out and wind up in the criminal justice system, according to a January 2010 study from the Advancement Project, a legal action group.

Alexa Gonzalez missed three days of school because of her arrest. She spent those days throwing up, and it was a challenge to catch up on her homework when she returned to school, she said. Her mother says she had never been in trouble before the doodling incident.

"Our mission is to make sure that public schools are a safe and supportive environment for all students," said Margie Feinberg, an education department spokeswoman.

Our mission is to make sure that public schools are a safe and supportive environment for all students.
--Margie Feinberg, New York City Department of Education spokeswoman
RELATED TOPICS

Several media outlets have reported that school officials admitted the arrest was a "mistake," but when asked by CNN, Feinberg declined to comment specifically on the incident. She referred CNN to the NYPD.

The NYPD did not return CNN's repeated phone calls and e-mails. It is unknown whether charges will be pressed against Alexa.

Kenneth Trump, a security expert who founded the National School Safety and Security Services consulting firm, said focusing on security is essential to the safety of other students. He said zero tolerance policies can work if "common sense is applied."

Michael Soguero recalls being arrested himself in 2005 when, as principal at Bronx Guild School, he tried to stop an officer from handcuffing one of his students. A charge of assault against him was later dropped. He says police working in schools need specific training on how to work with children.

In Clayton County, Georgia, juvenile court judge Steven Teske is working to reshape zero tolerance policies in schools. He wants the courts to be a last resort. In 2003, he created a program in Clayton County's schools that distinguishes felonies from misdemeanors.

The result? The number of students detained by the school fell by 83 percent, his report found. The number of weapons detected on campus declined by 73 percent.

"There is zero intelligence when you start applying zero tolerance across the board," he said. "Stupid and ridiculous things start happening."