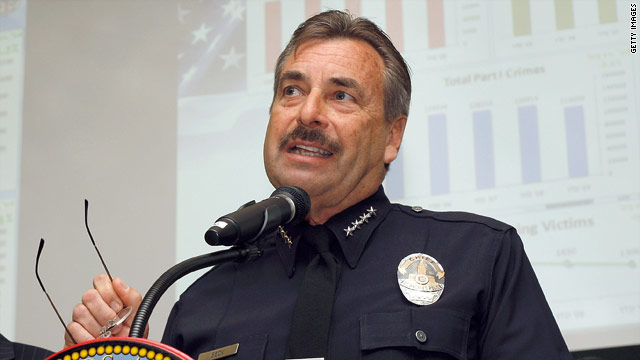 Los Angeles' new police chief, Charlie Beck, comes from an LAPD family and has been on the force since 1977.
STORY HIGHLIGHTS
RELATED TOPICS

(CNN) -- Los Angeles Police Chief Charlie Beck was sworn in for a five-year term in November, succeeding native New Yorker William Bratton, who retired to take a job in the private sector.

Beck, who joined the LAPD in 1977, faces a large budget shortfall amid California's fiscal crisis and the challenge to keep the city's lower crime rates in place and build on the trend. He has said one way to do that is to take on the formidable task of cutting gang violence. As Beck settles into the job, he is sharing his philosophies and views on policing with CNN.

CNN: Los Angeles Mayor Antonio Villaraigosa called you the right man at the right time to shape this department's future. What specifically do you think the mayor meant?

Beck: I'm a native of the area. I come from a police family. I am a career LAPD officer. I am in touch with the rank and file. I am able to transfer my vision, my prior policing, to those that work with me at whatever rank. And that's what leadership is really about. It's about putting an imprint on the organization.

CNN: You have spoken a lot about transparency. How does the word apply to policing in Los Angeles?

CNN: How does the public see the transparency? How is it visible to the people?

Beck: We had a very critical internal audit done of our purchasing practices and that was made public. In many organizations -- including this one -- in the past that would have been just for the chief's eyes only. The changes would have been made without fanfare. But that's not the way we do it. That audit was made public, given out to the media and became a news issue because we're so transparent. When we find issues, we let people know about them and we make it clear what we're going to do about them. ... We are as transparent as I know how to make a police department.

CNN: With the California fiscal crisis and national economic weakness, how likely is it that the LAPD will cut funding for officers?

Beck: We already have reduced funding for the police department. We had to come up with a way to make up for a $100 million shortfall this year, which is right around 10 percent of our total budget. We did that by changing the way we reimburse overtime. This is not only a reduction in pay for the officers because they no longer get overtime, it is also a reduction of the number of police who are on the street at any given time. That's a very real change that's just been implemented to deal with the budget crisis.

CNN: How many officers do you have now?

Beck: A little under 10,000. Our authorized strength is 9,963. We have not cut any jobs. For the last several years we have been growing the police department, adding officers. In the past we were trying to get back to over 10,000. We are going to put that goal off for at least this remaining fiscal year. This police department is historically understaffed. We police a city much larger than Chicago with less officers. We police a city geographically much larger than New York but with a third the number of officers. We're going to work to change that, but not this year. I think the city of Los Angeles would be well policed with 12,000 officers.

CNN: What did understaffing in the past do to the LAPD's ability to make the city a safer place?

Beck: It completely changes the style of policing. There is a common phrase that has been used over the last several years called thin blue line policing -- the thin blue line between right and wrong, the thin blue line between criminals and society. When you have too small a police force it restricts your ability to solve problems because all you're able to do is respond to emergencies, to chase 911 calls, to put it simply. When that happens, first of all, you become separate from the community. You're not able to spend any time working on solutions, you're just constantly chasing the symptoms. When you're too small, you end up seeming ineffective. It is extremely hard on the morale of officers.

CNN: They say nobody walks in L.A., but do LAPD officers go on foot patrol?

Beck: In high density areas, absolutely. L.A. is almost 500 square miles. The city is not designed to be walked in, it's designed to commute by vehicle. In downtown, Hollywood and in the parks we use foot beats. We're also a big fan of bicycle patrols, which kind of split the difference. You can cover more area than foot beat officers can and it is also very engaging to the public.

CNN: What's your long-term goal for the LAPD?

Beck: My long-term goal as the chief of police in Los Angeles is to make this organization independent, able to function independently of its leader in a constitutional and effective manner.

CNN: What's your proudest moment at the LAPD?

Beck: My proudest moment is my daughter's and my son's graduation from the police academy. To recognize that both of them had not only matured as adults but launched on a career that I admire -- that was a hugely proud moment.

CNN: Do you have a favorite cop show?