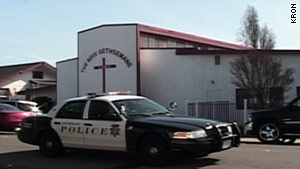 "We're not sure if those two victims were targeted, but someone definitely in that general area where the victims were, was targeted," French said.

Police are unsure why the church, filled with more than 100 people, was attacked.

The male victims, ages 14 and 19, are expected to make full recoveries, French said.

The assailants were described as being in their late teens or early 20s, French said.

On the East Bay, Richmond is north of Berkeley, California.