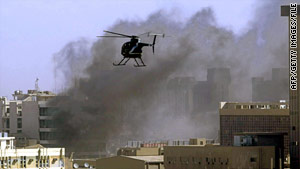 A Blackwater copter hovers over a Baghdad bomb site in 2005. The firm had 1,000 contractors in Iraq at one point.
STORY HIGHLIGHTS
RELATED TOPICS

Washington (CNN) -- Two ex-Blackwater Worldwide employees allege the company charged the government for a prostitute and strippers and kept incompetent personnel for financial reasons, part of what they call a systematic pattern to defraud authorities.

The accusations come in a lawsuit filed by Brad and Melan Davis -- who said the fraudulent activity, such as double billing and submitting false invoices, occurred while the security firm, now known as Xe, carried out its work in Iraq, Afghanistan and in Louisiana during Hurricane Katrina's aftermath.

Melan Davis, who was involved in record-keeping, said Blackwater billed the government for prostitution services in Afghanistan from a Filipino female, whose name was on Blackwater's payroll roster under a category called "Morale Welfare Recreation."

She said Blackwater billed the woman's plane tickets and monthly salary to the United States.

The lawsuit also said a vendor being paid for "cleaning services" in Louisiana was providing strippers.

Another accusation in the suit was that Melan Davis was wrongfully dismissed after raising the issue of "fraud and abuse."

Xe on Friday responded to the suit.

"The allegations are without merit and the company will vigorously defend against this lawsuit. It is noteworthy that the government has declined to intervene in this action," Xe said in a statement to CNN.

The married couple filed suit in December 2008 in U.S. District Court for the Eastern District of Virginia under the False Claims Act. It was unsealed this month.

Blackwater became the target of widespread Iraqi outrage after its contractors were involved in the September 2007 shooting in Baghdad's Nisoor Square that left 17 civilians dead. That outrage was renewed in December when a U.S. judge dismissed manslaughter charges against five guards involved in the shootings on constitutional grounds.

In the fraud suit, Brad Davis, an ex-Marine who worked as a security guard for Blackwater, said he "personally observed" three instances where personnel "intentionally used excessive and unjustified deadly force" and the suit said Blackwater refused to fire such "unqualified people."

Blackwater would continue to retain "wholly incompetent" personnel so they could pay their tuition bills to the company's private training facility, the suit said.

In Louisiana, where Blackwater was contracted to supply security services after Katrina, employees there "submitted a variety of bogus receipts," the suit said.

"For example, Blackwater employees, when filling up Blackwater vehicles at commercial gas stations, would simply pick up the receipts that were left behind by other customers. They would then submit these receipts and be paid in cash by Blackwater."

At the same time, the suit said, Blackwater failed to provide the services set down under its contract with Louisiana and the Federal Emergency Management Agency. It said Blackwater didn't monitor the "deadly weapons" it provided employees and "lost track of countless weapons."

The suit said Blackwater overbilled for travel expenses and "created phone invoices to obscure the fact that Blackwater had failed to keep any of the necessary contemporaneous documentation on travel."

The suit said Melan Davis attempted "to blow the whistle on the fraud and abuse occurring in New Orleans" and was told in 2006 she "needed to back off." The suit said she was fired in 2008 when "she was on leave battling cancer."

Blackwater had about 1,000 contractors working in Iraq at the height of its involvement, guarding diplomatic convoys and supply vehicles after the U.S. invasion in 2003. At least 10 of its employees were killed, including four whose burned and mutilated bodies were dragged through the streets of Falluja after an ambush in 2004.