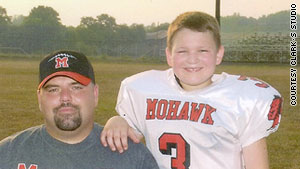 Jordan Brown is one of the youngest juveniles to be charged with murder, according to legal experts.

(CNN) -- On a chilly morning in February 2009, state police found 26-year-old Kenzie Houk in her bed with a bullet though her head. She was eight months pregnant.

The search for her killer ended with the most surprising murder suspect residents of Wampum, Pennsylvania, had ever seen: 11-year-old Jordan Brown, the son of the victim's fiancé.

He is one of the youngest suspects in the country to be charged with homicide, legal experts say. There are two counts of homicide, one covering the fetus.

He pleaded not guilty to the charges in May.

In Pennsylvania, there is no lower limit for the age someone can be charged as an adult with criminal homicide. If convicted, Jordan, now 12, faces life in prison without the possibility of parole.

The question of age is being raised in the Supreme Court this year where the practice of sentencing young people younger than 14 to life in prison without parole is being challenged.

After nearly a year of silence, Jordan's family, friends and attorney are bringing attention to the case as more court hearings loom. They say Jordan is innocent and should be tried in juvenile court. This month, they will launch the Jordan Brown Trust Fund to raise money for his defense.

The suspect's father has not publicly discussed the case, and CNN has been unable to reach him for comment.

"Our first step is decertification, because we feel like he is amenable to juvenile rehabilitation," said attorney Dennis Elisco of New Castle, Pennsylvania. "Not only do I know he's amenable, but I know he's innocent."

In almost half the states across the country, children can be prosecuted and tried in adult court, according to the University of Texas' Lyndon B. Johnson School of Public Affairs. Many of the laws passed were passed during a time when juvenile crime spiked in the 1980s and 1990s.

But sentencing experts say a majority of homicide cases involving children as young as Jordan are tried in juvenile courts, where the records remain sealed and sentences are less harsh.

At the time of the slaying, Jordan was a chubby fifth-grader with dark brown hair and an energetic smile. He liked riding bikes and reading Harry Potter books. Since the third grade, he played quarterback in his community's football league.

Family and friends describe him as an "all-American boy."

On weekends, Jordan hunted alongside his father, Chris Brown, who purchased the youth-sized 20-gauge shotgun state police believe was the murder weapon. The gun was given to Jordan as a present for Easter, and the boy's lawyers say he only used it for hunting.

Jordan's family friends say they never saw him exhibit any violent behavior. And he had no prior brushes with the law.

"He always got along with everybody, and he was always smiling," said Lonnie McConahy, 43, a co-trustee of the Jordan Brown Trust Fund. "It was always 'yes, sir' and 'no, ma'am.' "

After his arrest, Jordan was placed in the Lawrence Country Jail, a facility for adults. But authorities transferred him to a juvenile center in March after his attorneys argued that the adult jail couldn't accommodate an 11-year-old.

Most juveniles who enter the Edmund L. Thomas Adolescent Detention Center come and go within a few weeks. But Jordan has spent a birthday and Christmas there. He missed a much-anticipated fifth-grade overnight field trip to Gettysburg and didn't get to play his final year on the junior football league.

His attorneys say Jordan is still unable to grasp the magnitude of what is happening to him. He is doing well in counseling, his attorneys and family say.

Jordan's detention facility locker holds his books and board games. His school friends and football teammates shower him with letters, cards and magazines.

He is showing signs of reaching puberty. He has grown several inches and has gained about 20 pounds. He's starting to look like a teenager.

Although it is rare to charge someone so young as an adult in the United States, the prosecutor in the case says Pennsylvania law left him with little choice.

In the case of homicide, "my choice is either to charge him as an adult, or don't charge him," said John Bongivengo of the Lawrence County District Attorney's Office. "Not charging him at all wasn't feasible."

My choice is either to charge him as an adult, or don't charge him.
--Prosecutor John Bongivengo

It also is rare for an 11-year-old to commit a violent crime. In his 30-year analysis of juvenile homicides, Northeastern University criminologist James Alan Fox found about 500 cases of children younger than 11 who were suspected of murder.

Brain science has been central to the debate on whether juveniles should be punished as adults. It's only in the past decade that there's been any significant scientific research on the adolescent brain. .

"The teenage brain is like a car with a good accelerator but a weak brake," wrote Steinberg, who is considered among the foremost experts in the field. "With powerful impulses under poor control, the likely result is a crash."

The U.S. Supreme Court took into account the growing body of adolescent brain research in 2005 when it banned the death penalty for juveniles.

"For all of the reasons the Supreme Court has rejected imposing the death penalty on children and all the new brain research, those reasons are magnified when thinking about a child as young as 11," said Marsha Levick, director of the Juvenile Law Center in Philadelphia.

Jordan's defense argues that there are no witnesses to connect him to the crime, but prosecutors are relying on the statements of the victim's oldest daughter, who was 7 at the time. She told authorities she heard a loud boom before leaving for school with Jordan.

The teenage brain is like a car with a good accelerator but a weak brake.
--Laurence Steinberg, Temple University

That sound, prosecutors say, was the noise of a 20-gauge youth shotgun that state police believe is the weapon responsible for Houk's slaying.

But Jordan's attorneys say the witness, now 8, is unreliable because she didn't say she heard a "boom" the first two times police interrogated her. It wasn't until a third round of questioning that she told them about the noise.

The victim's body was discovered by her youngest daughter, just 4.

Prosecutors allege there was tension between Jordan and Houk, who had moved into the father's farmhouse. They say Jordan was jealous of Houk and her two daughters. The unborn child was a boy.

"There are no signs of forced entry," Bongivengo added. "No signs of a robber or burglar."

Jordan's supporters deny any rivalry or bad feelings between the boy and his would-be stepmother.

Prosecutors also allege that there is strong physical evidence linking Jordan to the crime. Police found gunshot residue on Jordan's shirt. A state trooper testified that the gun smelled like it had been freshly fired. His defense team argues that many of Jordan's shirts and guns had residue because he frequently hunted with his father.

Also, police said they discovered a blanket covering the gun with a quarter-sized hole burned into it.

With outcome of the decertification hearing still months away, there is little consolation for the victims' family.

The victim's family wants Jordan to be charged as an adult for taking two lives, they say.

"She'd give her last penny to everyone," said her mother, Debbie Houk. "She loved everyone and didn't have a mean bone in her body."

Debbie Houk, said she never expected to be a mother again. But after her daughter was slain, she now cares for her grandchildren.

"The day Kenzie was murdered, the whole family was served with a life sentence," she said. "There are a 4-year-old and 7-year-old who are serving life right now. They are never going to see their mom."