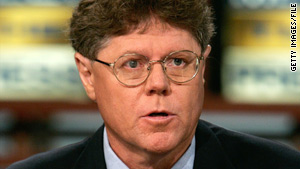 (CNN) -- A researcher who warned of Hurricane Katrina's catastrophic damage sued Louisiana State University on Wednesday, accusing university officials of pushing him out of his job over his criticism of the Army Corps of Engineers.

Ivor van Heerden led the investigation into the failure of the levee system surrounding New Orleans, which flooded when the levees failed during the 2005 storm. The inquiry put much of the blame for the disaster on the Corps, which his lawsuit called "an important funding source" for LSU.

The suit accuses LSU of putting "the bureaucratic interests of university officials above the health and safety of millions of people who live in the path of the hurricanes that threaten the Gulf Coast every year." It argues that school officials "engaged in illegal reprisal" against van Heerden, the deputy director of LSU's Hurricane Center, because of his critical research and testimony about the levee system.

Van Heerden was told in 2009 that his contract, which expires in May, would not be renewed. There was no immediate response from LSU officials to the complaint, which was filed in a state court in Baton Rouge on Wednesday.

In a statement issued Wednesday afternoon, LSU Chancellor Michael Martin said the decision not to renew van Heerden's job was made before Martin joined the university administration, but he said he had reviewed the issue "and am confident that the process was handled appropriately."

"LSU cannot comment on confidential personnel matters or on pending litigation, but I can tell you that LSU wholeheartedly supports its faculty and values their research, teaching and scholarly publishing," Martin said. "LSU also values its role as the state's flagship university, and, as such, will continue its work to help preserve Louisiana's coastline, mitigate hurricane damage and search for ways to protect the state's coastal populations."

Katrina killed more than 1,800 people when it struck near the Louisiana-Mississippi state line in August 2005. Most of the dead were in or around New Orleans, where more than three-quarters of the city flooded.

Van Heerden has said the university barred him from testifying as an expert witness in a case against the Corps of Engineers. But he served as an adviser to the plaintiffs in that suit, which resulted in a finding of negligence against the agency in November.