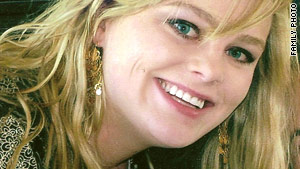 The family of Morgan Harrington will hold a Mass for her Friday in Roanoke, Virginia.
STORY HIGHLIGHTS
RELATED TOPICS

(CNN) -- The person responsible for a Virginia Tech student's death was familiar with the area where her body was recovered, police said Thursday.

The farmland site where Morgan Harrington's remains were found is the "most significant" aspect of the investigation into her death, Virginia State Police Lt. Joe Rader said.

He asked that members of the surrounding community call police with any details of the area and who has frequented it.

"People in North Garden, people in the Anchorage Farm area, you know what goes on there," Rader said, referring to areas of Virginia's Albemarle County. "You know the history. You know who comes in and out of that vicinity. You may not realize it, but you probably have some information for us that you don't think is important."

Morgan Harrington disappeared October 17, after attending a Metallica concert at the University of Virginia's John Paul Jones Arena in Charlottesville, Virginia. The 20-year-old education major was separated from her friends at the concert.

A farmer discovered her skeletal remains on his 700-acre farm January 26, police said. The farm is about 10 miles from the concert site.

There have been no arrests in the case, police said. The cause of her death is still under investigation.

Investigators think that the farm "did not present an unnecessary risk for the person responsible" and that the person passed through or visited the farm or the nearby area, Rader said.

Traveling to the area where the remains were found "would have created a significant risk for any person not familiar to that area and not comfortable with that type of setting," Rader said.

"Farmland like the place where Morgan's body was located has obstacles, difficult obstacles. It has streams, it has fences, it has defects, it has terrain that changes. That's important, that's a high-risk opportunity to pick that location to take Morgan Harrington unless you're familiar with the area," he said.

"We don't believe those are challenges that someone unfamiliar with the area would confront."

The farmer who found Harrington's remains came across them in a remote section of a hayfield, police said last month. The farm's owner, David Dass, told CNN affiliate WTVR that he was out looking for damage after wind and rain knocked down several trees in his yard when he found "what looked like a human skull." He told WTVR that the area is at least a mile and a half from a main roadway.

Read more about the case from WTVR

"There is no public access to this particular area. The hayfield was last cut in August 2009 and would have been possibly waist-high by mid-October 2009," a January police statement said.

On the October night Harrington went missing, she had left her friends to use the restroom during the concert, police said. When she did not return, her friends called her cell phone at 8:48 p.m. She told them she was outside the arena and could not get back in because of its policy, police said, but she told them not to worry about her and she would find a ride home.

There are restrooms inside the arena, police said, and authorities do not know how or why Harrington got outside. Witnesses who saw her outside the arena said she did not appear to be with anyone, police said.

About 9:30 p.m., witnesses reported seeing a person matching Harrington's description walking on a nearby bridge, police said. No further sightings were reported.

Harrington's purse, with her identification and cell phone inside, was found the following day in an overflow parking lot near the arena, police said. A friend had driven Harrington's car to the concert, she said, and still had the car keys when they became separated.

The family will hold a Mass for Harrington on Friday in Roanoke, Virginia.

"We are grief stricken by her death but also lifted by the knowledge that Morgan Dana Harrington was precious to so many and will not be forgotten," her family wrote Monday on their Web site dedicated to Harrington. "She mattered, to us all."