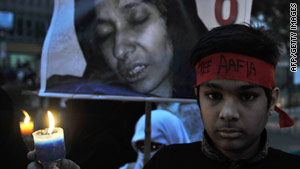 The Manhattan jury began deliberations Monday afternoon and sent a note shortly before 2 p.m. Wednesday saying they had reached a verdict.

Siddiqui listened to the verdict without emotion but let out an outburst once the jury was escorted out of the courtroom.

"This is a verdict from Israel, not America," she said. "Anger should be directed to where it belongs. I can testify to this. I have proof."

Authorities removed her from the courtroom. She will be sentenced May 6.

Siddiqui's family said she had been unjustly found guilty.

"Today's verdict is one of many legal errors that allowed the prosecution to build a case against our sister based on hate, rather than fact," they said in a statement released through the International Justice Network.

"We believe that as a result, she was denied a fair trial, and today's verdict must be overturned on appeal."

Prosecutors said Siddiqui shot at two FBI special agents, a U.S. Army warrant officer, an Army captain and military interpreters while she was being held unsecured at an Afghan facility on July 18, 2008.

Authorities said Siddiqui used an officer's rifle to fire two shots at the personnel, who were hidden from her view by a curtain. She hit no one. The warrant officer returned fire with a pistol, hitting Siddiqui at least once.

Afghan police had arrested her a day earlier outside the Ghazni governor's compound in central Afghanistan after finding her with bomb-making instructions, excerpts from the "Anarchist's Arsenal," papers with descriptions of U.S. landmarks, and substances sealed in bottles and glass jars, according to a September 2008 indictment.

The indictment said Siddiqui had "handwritten notes that referred to a 'mass casualty attack' " listing several locations in the United States and "construction of 'dirty bombs.' "

"Siddiqui also possessed a computer thumb drive that contained correspondence referring to specific 'cells,' 'attacks' by certain 'cells,' and 'enemies,' " the indictment said. "Other documents on the thumb drive discussed recruitment and training."

Siddiqui, whom the FBI had sought for several years for suspected ties to al Qaeda, was extradited to the United States in August 2008.

Since 2003, the whereabouts of Siddiqui, an American-educated neuroscientist, had been the source of much speculation.

According to Amnesty International, Siddiqui and her three small children were reported apprehended in Karachi, Pakistan, in March 2003, shortly after the FBI issued an alert requesting information about her location.

Several reports indicated that Siddiqui was in U.S. custody after her arrest in Karachi. But in May 2004, then-Attorney General John Ashcroft and FBI Director Robert Mueller identified Siddiqui as being among several sought-after al Qaeda members.