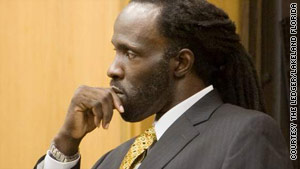 An acquaintance of Abraham Shakespeare was arrested Tuesday in connection with his slaying.
STORY HIGHLIGHTS

(CNN) -- A Florida woman has been arrested in connection with the death of a lottery millionaire, whose body was found buried under recently added concrete at a home, authorities said.

Dorice Donegan Moore, 37, was arrested Tuesday evening on charges of accessory after the fact regarding a first-degree murder in the death of Abraham Shakespeare, 43, said Hillsborough County Sheriff David Gee.

Moore befriended Shakespeare after he won a $31 million Florida lottery prize in 2006 and was named a person of interest in the case after Shakespeare went missing, authorities said.

Before her arrest, Moore proclaimed her innocence during a tearful, impromptu news conference outside her home. She said was planning to help Shakespeare write a book about the challenges of winning millions and that she was helping him manage the money.

"Abraham had a life of drama because of the money," she told CNN affiliate WTSP. "The money was like a curse to him. And now it has become a curse to me."

Moore might have committed fraud to obtain parts of Shakespeare's fortune, and she bought lime to deal with his body and was trying to find someone to move the corpse to another location, Gee said.

Shakespeare was killed on April 6 or April 7, and Moore has admitted trying to convince Shakespeare's family members that he was still alive, Gee said.

Deputies found Shakespeare's body outside a home in Plant City late January after receiving a tip from an associate of Moore, Gee said.

Moore could face more charges, and authorities are looking for other suspects, Gee said.

Reporters were at the scene during Moore's arrest Tuesday and she again denied having anything to do with Shakespeare's death as she was led to a police cruiser in handcuffs, WTSP reported.