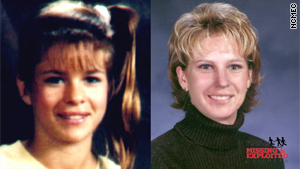 New York (CNN) -- For two decades, Ashyea Alford has literally been searching for a face in the crowd. Wherever she went, she would check out other women, hoping one of them might be her missing little sister.

When Alford was 15, Andrea Durham, her 13-year-old sister, vanished from the apartment they shared with their mother, Roseanne Sterling, in Fort Walton Beach, Florida.

Alford and her mom headed out for a meeting on the evening of February 1, 1990, leaving Andrea home to vacuum the apartment.

When they returned about two hours later, the vacuum was standing upright in the living room but there was no sign of Andrea.

"None of her things were gone or disturbed. Her purse and personal items were still at the house. We couldn't find anything of hers that was missing,'' Alford said in an interview just days before the 20th anniversary of her only sibling's disappearance.

Andrea "literally disappeared without a trace," said Roberta Holloway, the investigator with the Okaloosa County Sheriff's Office who is assigned to the case.

It used to be so hard to go to the mall.
--Ashyea Alford, sister

With no physical signs of foul play or forced entry, authorities initially classified Andrea as a runaway, even though she had never left home before or even threatened it.

But suspicions rose because Andrea was unhappy after she changed schools when her family moved to a new apartment.

Andrea also had recently gotten into trouble with the law when she was caught acting as the lookout for other teenagers who were stealing change out of unlocked cars in a Red Lobster parking lot.

However, her sister said Andrea was not especially worried and felt relieved by a judge's decision to give her a light punishment, community service.

"She's always been a very mellow person. She was not upset,'' Alford said, revealing that Alford herself had run away a few times but always came home. "She's the type of person that doesn't like to be outside by herself. The only way that I think she would have left was if she was with somebody else,'' Alford said of her sister, who would now be 33.

Andrea "was a loving person'' and "the type of kid that would donate her allowance to Christian missionaries,'' Alford said.

"She was a sweet one. I was the mean one. I picked on her a lot, so for a long time I felt a lot of guilt that, you know, if I had been there for her and she did run away. ...'' Her voice trailed off.

These days Andrea Durham's case is an open missing person investigation, Holloway said. There have been no solid leads or confirmed sightings.

The sheriff's office pursues all new tips and leads, Holloway said. Someone sent in a photo of a catalog model along with the age-progressed photo of Andrea. Another time, someone persuaded investigators to check out an out-of-state firefighter who may have resembled her. The leads went nowhere.

Alford and her mother gave DNA swabs that went to the FBI and the Florida Department of Law Enforcement, in case there's ever a match with discovered remains.

The FDLE also put Andrea's photo and information on cold case playing cards handed out to inmates across the state. Her photo also was shown in the video for the 1992 Soul Asylum song "Runaway Train.''

Her mother followed up on leads for years, flying to other cities and hiring private investigators until she could no longer afford the fees.

I grew up as an only child, even though I wasn't.
--Ashyea Alford, sister
RELATED TOPICS

Her mother and sister appeared on national TV programs that included at least one psychic and a program that Alford said left her feeling exploited.

With camera rolling, producers persuaded Alford to approach a fast-food restaurant employee, a girl they somehow thought might have been her missing sister.

"I could tell from 100-thousand feet away that it wasn't her, but they wanted me to do it anyway,'' she said.

Though Andrea's parents had broken up before she disappeared, her father has helped in the search, Alford said. His mother "is still passing out fliers to truck drivers'' in Abilene, Texas, where she lives.

The mystery inevitably enters Alford's daily life. ''I don't let my children go anywhere,'' she said. She has two boys, ages 8 and 14.

"It affects me, too, that I grew up as an only child, even though I wasn't,'' said Alford, who has a MySpace page for Andrea in the hope that it drums up new leads.

"I honestly believe that somebody somewhere knows something," she said.

One thing gives Alford a sense that her sister may still turn up: Soon after Durham vanished, her mother married a man who had a story of his own. As a teen-ager, he ran away from home and came back to his family 20 years later.

"They thought he was dead and gone,'' Alford said.

"Most runaways return or check in within one week," said David Finkelhor of the Crimes Against Children Research Center at the University of New Hampshire. He said in 1999, the midpoint between Andrea's disappearance and the present, an estimated 4,100 children could be classified as having not returned or been located.

"But I believe the permanently missing are even a much smaller fraction than this number," he said.

Asked what she would tell Andrea if she could send her a message, Alford said: "To let her know that no matter the reason she was gone that we'd welcome her with open arms and everything would be forgiven. There's absolutely no reason for her to stay away. Nobody's angry. Just to know that she's alive would be enough.''

When she vanished, Durham was 5 feet 3 inches tall, 110 pounds with blond hair and green eyes. If you have information, call the Okaloosa County Sheriff's Office at 850-609-2000 or the National Center for Missing & Exploited Children at 1-800-THE-LOST.