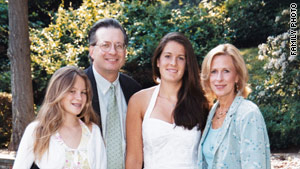 Dr. William Petit, with his wife, Jennifer Hawke-Petit, and their two daughters, Michaela, left, and Hayley.

Cheshire, Connecticut (CNN) -- A small, well-tended garden is all that remains at 300 Sorghum Mill Drive in this quiet town.

Even on a dreary, rainy January day, with little abloom, the spot is peaceful. It shows few signs of the horrifying home invasion that killed a mother and her two daughters there more than two years ago, robbing a man of his wife and children.

The killings shook the suburban community, prompted legislative changes in the state, and attracted the attention of the national media.

Two men broke into the home around 3 a.m. on July 23, 2007, and subjected the Petit family to a seven-hour ordeal, according to police. By the end, they had beaten up Dr. William Petit, strangled his wife, 48-year-old Jennifer Hawke-Petit, and set the home ablaze, authorities said. The couple's daughters, Hayley Petit, 17, and Michaela Petit, 11, died from smoke inhalation, authorities said.

The deaths occurred after one of the attackers drove Hawke-Petit to a Bank of America branch to withdraw money around 9 a.m., police said. She was able to alert a bank teller that the family was being held captive, and the bank teller alerted police, authorities said.

Media reports said that Hawke-Petit and Michaela were sexually assaulted. Prosecutors declined to confirm details because of a gag order in the case.

The men left the home around 10 a.m. and were taken into custody after crashing into two Cheshire police cruisers that had formed a barricade, police said.

Steven Hayes, 46, of Winsted, Connecticut, and Joshua Komisarjevsky, 29, of Cheshire, face charges that include felony murder, kidnapping, sexual assault and arson. They could face the death penalty if convicted.

The motive in the killings remains unclear, but its effect is plain.

"Because men murdered Michaela, she cannot make homemade sauce, play with her friends, or kiss me goodnight," Dr. William Petit told state lawmakers in March, during a hearing on whether the state should repeal the death penalty.

"Because men murdered Hayley, she cannot experience her college years at Dartmouth, row on the Connecticut River, or sit and chat with me. Because men murdered Jennifer, she can no longer comfort a student at Cheshire Academy, talk with her parents and sister, or sit with me on our porch.

"My family got the death penalty, and you want to give murderers life. That is not justice," he said.

My family got the death penalty, and you want to give murderers life. That is not justice.
--Dr. William Petit, to Connecticut lawmakers

The lawmakers voted to repeal the death penalty, but Gov. Jodi Rell vetoed the bill. Connecticut has carried out only two executions in nearly 50 years, the last in 2005.

Jury selection for Hayes' trial is under way in nearby New Haven, with three jurors selected as of last week, according to the New Haven Superior Court clerk's office. It is expected to take several months to pick a full jury. Evidence will be presented in the case in September. Komisarjevsky will be tried separately.

"It's probably difficult to find a juror who didn't know somebody who knows somebody who knew the family, who didn't feel at all affected by the case," said Yale law professor Steven Duke, who is not involved with the case.

"Nothing like that has probably ever happened in Cheshire, or anywhere around there in probably 100 years," he said.

"It's a very unusual case in many respects for a little town like this ... and it's pretty clear it's had some effects on the politics in Connecticut."

"It was really a function of people who were very shaken, including legislators, about the tragedy," he said in a phone interview. Lawmakers "wanted to use that opportunity to reflect and act upon deficiencies that could be clearly identified and isolated within our criminal justice system."

"The Petit case is in my experience probably the most violent crime in my tenure," said McDonald, who was elected to the Senate in 2002. "This crime ... was unique in its violence and viciousness. It was particularly heinous, in my opinion."

Legislators called for hearings in January 2007 and passed a number of reforms during a special session the following year, McDonald said. One created a new crime of home invasion, a Class A felony, punishable by up to 10 years in prison.

"The consensus in Connecticut was that an invasion of one's home can be, under some circumstances, much more detrimental to society and to a community's sense of well-being than a burglary of an office building," McDonald said.

The reform package also changed the makeup of the Board of Pardons and Paroles. It added a staff psychologist and grants the board permission to access an offender's records from juvenile court, which previously had been held confidential.

The legislation also bars the board from acting on a case unless it has all of the relevant records, according to a statement from Rell when she signed the bill.

Hayes and Komisarjevsky, who had criminal histories of burglaries but not violence, were on parole, but neither had been subjected to a full parole hearing before they were released, The Hartford Courant reported. They were released after "administrative reviews," which are performed by three board members, the newspaper reported.

Such administrative reviews, which did not require the appearances of the inmates, "were essentially abolished" with the 2008 legislation, said Robert Farr, chairman of the parole board.

He said the board did not have "the information that should have been available to them" when the paroles were granted to the two men, including the presentence investigation, a copy of court transcripts, and some police reports.

"The board didn't have any of that information," he said. "The process of parole hearings in Connecticut has changed dramatically."

There is a "complete inability to share information electronically," he said. The state now plans to integrate the information, he said.

Despite being mentioned often during the state's death penalty debate last year, the killings did not change the opinion of Connecticut voters about the death penalty, according to Quinnipiac University polls from 2000 and 2009.

In 2000, the poll showed that 63 percent of voters were in favor of the death penalty; 27 percent were against it. Nine years later, ahead of the governor's veto of the bill to ban capital punishment, 61 percent said they favored keeping the death penalty and 34 percent opposed it.

In her June veto message, Rell used a quote that Petit had incorporated into his address to lawmakers.

"Dr. William Petit recently quoted Lord Justice Denning, master of the rolls of the Court of Appeals in the United Kingdom, who said: 'Punishment is the way in which society expresses its denunciation of wrongdoing: and, in order to maintain respect for law, it is essential that the punishment inflicted for grave crimes should adequately reflect the revulsion felt by the great majority of citizens for them.'"

It brings it all front and center again.
--Chris Gilleylen, Petit family friend

Revulsion and pain are certainly still felt in Cheshire, an upper-middle-class city of about 30,000 residents, just north of New Haven. The jury selection only worsens it, one former neighbor of the Petits said.

"It brings it all front and center again," said Chris Gilleylen, a friend of the Petit family.

She lives about 10 houses from where the family's house stood, she said, and is an organizer of the garden there now, called the "Three Angels Garden."

She also authored a petition that sought to first bar publication of a book on the killings because of a gag order in the case, and then to keep it from the town's library.

Seeing the house every day after the killings was "very, very stressful, very difficult," Gilleylen said. The garden, which includes some of William Petit's favorite flowers, helps, she said.

One small sign on the property notes that it is a "living memorial garden." The sidewalk below the garden slopes in one spot, an eerie reminder that it once marked the beginning of the family's driveway.

"It will be prettier in the spring," she said.