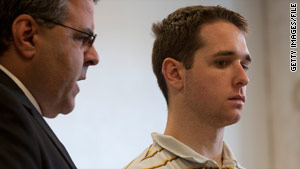 (CNN) -- A lab technician charged with killing a Yale graduate student pleaded not guilty Tuesday during a court hearing in New Haven, Connecticut, his attorney said.

Raymond Clark III is charged with murder in the death of Annie Le. Her body was found inside a wall of a Yale lab building on September 12 -- the day she was to be married. She had been strangled, the Connecticut medical examiner's office determined.

Clark also waived his right to a probable cause hearing, said his lawyer, Joe Lopez. The next pretrial hearing was set for March 3.

Clark is being held in lieu of $3 million bail.

Clark is not a Yale student, but has worked as a lab technician at the university since 2004. He lived with his girlfriend, who also is a Yale lab technician, according to New Haven police.

A Yale faculty member described Clark's job as maintaining colonies for animals used in research. The lab is in the basement of the building where Le's body was found.

A motive in Le's killing was unclear, but police said they were treating the case as workplace violence.

Le, who was 24, was buried in California on September 26.